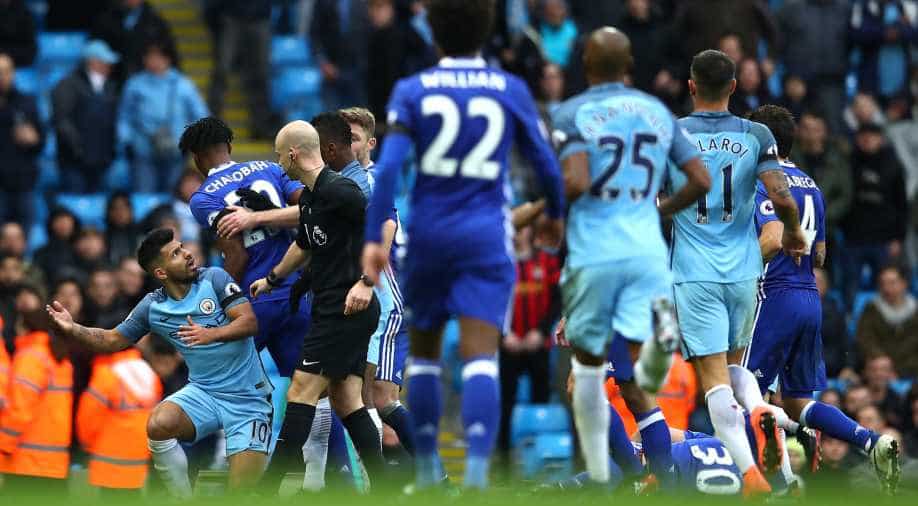 Chelsea came from behind to secure a dramatic 3-1 win at Manchester City and forge clear at the top of the Premier League as their top-of-the-table clash ended in a mass brawl and two City players were sent off on Saturday.

Diego Costa, the league's leading marksman, scored his 11th of the season on the hour to equalise, substitute Willian notched on the counter-attack 10 minutes later and Eden Hazard sealed Chelsea's eighth straight win in the 90th minute.

Gary Cahill had given City a deserved lead just before halftime, slicing the ball into his own net with a clumsy attempted clearance, and the home side had chances to wrap up the points after the break as Kevin De Bruyne missed from three metres when it seemed easier to score.

In stoppage time, with Chelsea already guaranteed a four-point lead at the top, mayhem broke out following a terrible tackle by Sergio Aguero on David Luiz.

The Argentine was shown a red card and, as players piled in, Fernandinho was also dismissed for pushing Cesc Fabregas over the advertising hoardings.

It was the first time a team had finished a game with nine men in the Premier League for eight years yet, for large parts, it had looked as if it could be the end of Chelsea's purple patch with City largely dominating until Pep Guardiola's men were again found out defensively.

Yet City's goal was a soft one with Cahill displaying technical deficiency, trying to clear Jesus Navas's cross with his right foot when he needed to use his left.

City piled on the pressure after the break with De Bruyne forcing a fine save from Courtois and more comedy defending almost gifting a goal for Aguero before De Bruyne's open-goal miss from Navas's cross.

It was a costly error as Fabregas found Costa with a lovely, long ball which he controlled on his chest before outsmuscling Nicolas Otamendi and firing the equaliser.

Costa then put Willian clean through, the Brazilian firing across Claudio Bravo into the corner before he marked his goal with an emotional raising of his black armband to honour those who died in the Chapecoense air crash.

After Hazard had latched on to a long ball from Marcos Alonso to sprint clear of Aleksandar Kolarov and net the third, City's frustration got the better of them as Aguero's wild knee-high lunge on Luiz resulted in furious scenes with all 22 players and staff being involved in a melee.

Luiz, with his knee bandaged afterwards, refused to be drawn on Aguero's challenge.

"I don't like to speak about these type of things. Aguero is an amazing player who does a lot for football," he told Sky Sports.

"I want to dedicate this win to the people who died in Brazil. It was difficult to get my head together as I had some friends there. We just need to pray for the victim's families."