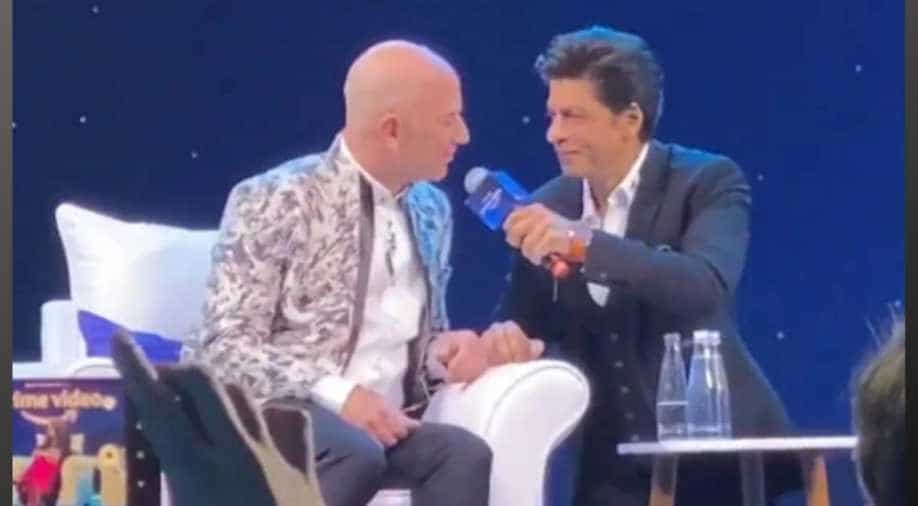 Shah Rukh Khan hosted the evening in Mumbai as he shared the stage with Jeff Bezos who played an absolute sport as he mingled with the top stars.

Amazon CEO Jeff Bezos is in India on a three-day visit as he met up with Bollywood stars in a welcome party organised for him by the Hindi entertainment industry.

Shah Rukh Khan hosted the evening in Mumbai as he shared the stage with Jeff Bezos who played an absolute sport as he mingled with the top stars.

Fun and learning evening with the Zordaar #Zoyaakhtar & the Zabardast @jeffbezos Thanx everyone at @PrimeVideoIN for arranging this. Aparna, Gaurav & Vijay Thx for ur kindness. @AmitAgarwal ur bow tie was a killer... pic.twitter.com/RQUi0854PZ

Interestingly, Shah Rukh made Jeff say a dialogue from his film ‘Don’ as the audience cheered them both. Shah Rukh asked Jeff to say the dialogue "Don ko pakadna mushkil hi nahi namumkin hai” but with a twist as he replaced the word ‘namumkin’ with its english counterpart ‘impossible’.

As Jeff repeated after Shah Rukh, the stars sitting in the audience had a great time. The video has now been shared several times on the internet but it was originally post on social media by actor Riteish Deshmukh.

The welcome party for Jeff Bezos was high on glamour yesterday as stars came in large numbers to meet Amazon CEO. Kamal Haasan, Vidya Balan, Farhan Akhtar, Bhumi Pednekar and many other Bollywood stars came to the special event.

Oscar-winning composer A R Rahman also came to the event as he posted a picture with Jeff Bezos from the blue carpet and wrote: "Dear Mr @JeffBezos, welcome to Mumbai."