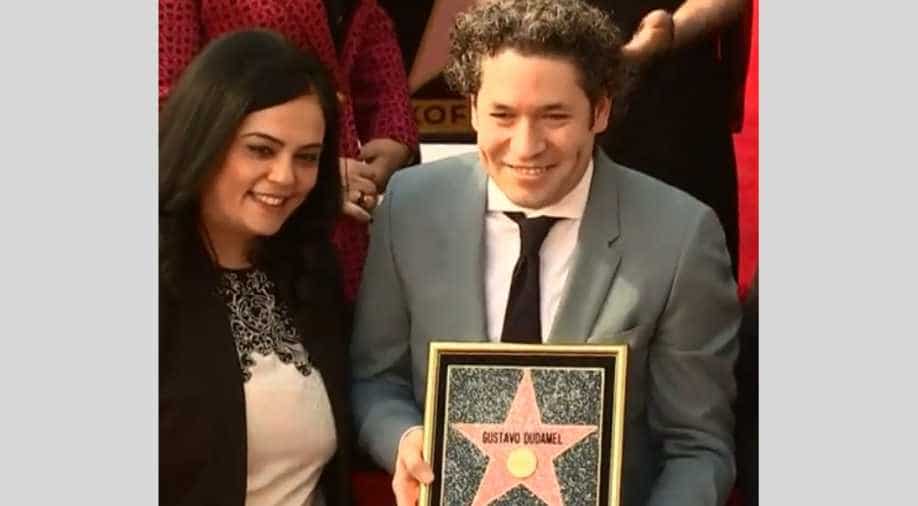 Dudamel addressed the political and economic crisis in his home country during the ceremony and dedicated his star to the Venezuelan people.

Acclaimed Venezuelan conductor Gustavo Dudamel was honoured on Tuesday (January 22) with a star on the Hollywood Walk of Fame in Los Angeles.

Dudamel, who will this year be marking his tenth year as the director of the Los Angeles Philharmonic, addressed the political and economic crisis in his home country during the ceremony and dedicated his star to the Venezuelan people.

"As the first Venezuelan to receive this great honour, this star also belongs to the people of Venezuela in the desire that it will provide a small measure of hope and inspiration during such terrible times," said Dudamel.

"Venezuela is living through an unacceptable political and social situation and we have to continue fighting, now more than ever, for the change that our people deserve. Tomorrow is crucial and tomorrow the immense voice of the majority should be heard and respected," added Dudamel, whose star ceremony was attended by Coldplay's Chris Martin and Oscar-winners Helen Hunt, Christoph Waltz and legendary film composer John Williams.

Dudamel had maintained a friendly relationship with the Venezuelan government after the death of former President Hugo Chavez through the youth orchestra program known as El Sistema. But last year, Dudamel slammed President Nicolas Maduro for using repression to quell protests after an 18-year-old musician and member of the country's youth orchestra program was killed at an anti-government rally. Maduro says his government is the victim of an "economic war."

John Williams, whose compositions Dudamel will be conducting in a series of upcoming concerts with the Los Angeles Philharmonic, called Dudamel a "genius."

"You'd expect a conductor to have to be about 60-years-old to acquire the mastery needed for this job unless of course a genius inexplicably arrives in the form of the thirty-something wizard who knows, does and masters it all. Unbelievable," said Williams, who has composed scores to films such as "Jurassic Park," "Jaws,'' "Star Wars'" and the Harry Potter and Indiana Jones films to name a few.

Aside from his work with the Los Angeles Philharmonic, Dudamel has been the Director of Venezuela's Simon Bolivar Symphony Orchestra since 1999.