U2 play their first-ever concert in India 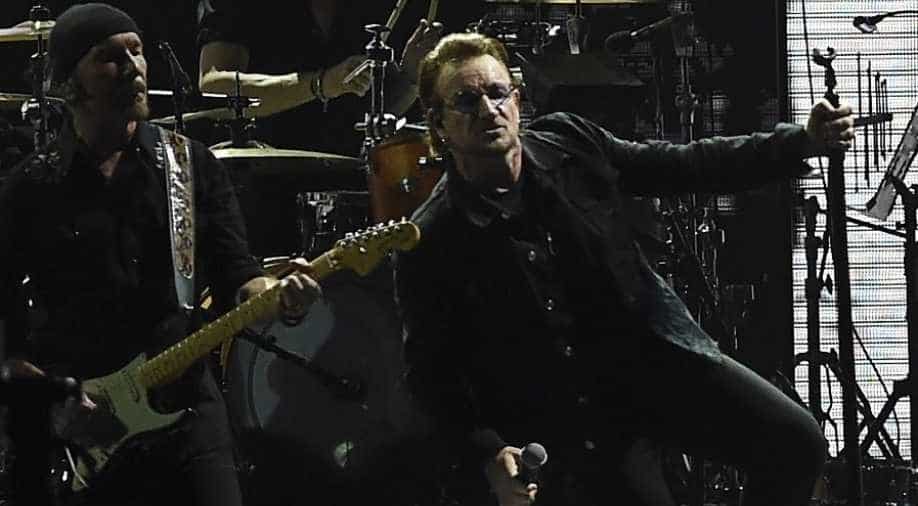 Irish rock band U2 singer Bono (R) performs during a concert at the D.Y. Patil stadium in Navi Mumbai on December 15, 2019. Photograph:( AFP )

Some 35,000 tickets were estimated to have been sold for the concert at Mumbai's DY Patil Sports Stadium.

Irish rockers U2 played their first-ever concert in India on Sunday, with top celebrities and mega-fans converging from across the vast nation to the coastal city of Mumbai.

U2 are the latest in a series of major international acts to tour the South Asian country, with Beyonce, Shakira, Coldplay, Demi Lovato and Bryan Adams among the superstars who have played to packed venues.

Some 35,000 tickets were estimated to have been sold for the concert at the DY Patil Sports Stadium, local media reported, with top Bollywood stars posing for photos before entering the venue.

Ahead of the concert, the band posted on their social media accounts a photo of the words "Ahimsa is the highest ideal".

"We were shaped and formed by Martin Luther King Jr who was a student of Mahatma Gandhi," frontman Bono told the NDTV news television channel in September.

"So we come as students to the source of inspiration that is 'Ahimsa' -- non-violence. Indians gave us this. It is the greatest gift to the world."

Mumbai is the last leg on The Joshua Tree Tour 2019 -- named after the band's seminal album -- which kicked off on November 8 in Auckland.

The Asia Pacific tour, which first started with stadium concerts in North America and Europe in 2017, marks three decades since the Irish group's "The Joshua Tree" was released.

Released in March 1987, "The Joshua Tree" reached into the roots of Irish and American music and produced classic hits "With or Without You," "Where the Streets Have No Name" and "I Still Haven't Found What I'm Looking For."