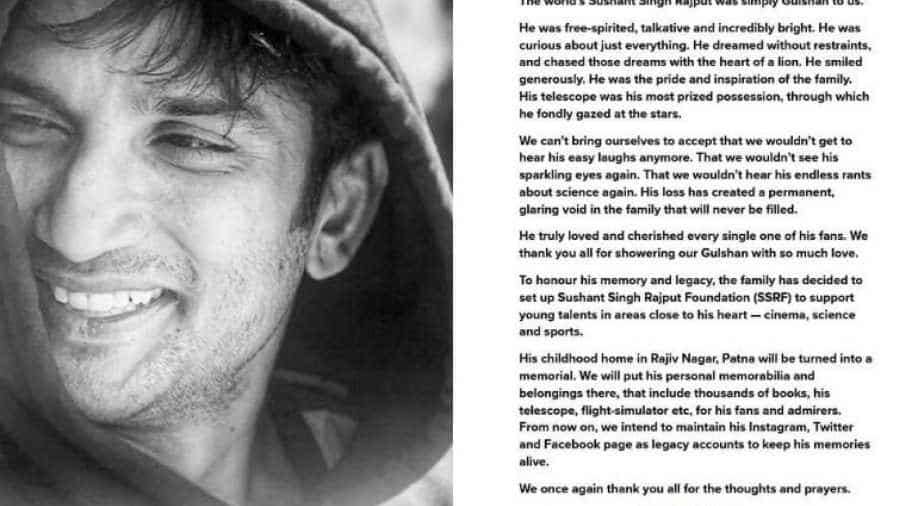 Sushant Singh Rajput's childhood home in Rajiv Nagar, Patna will be converted into a memorial.

''The world's Sushant Singh Rajput was simply Gulshan to us''. Two weeks after the Bollywood actor's unfortunate death, his family has issued an emotional statement thanking fans for loving the actor. In the statement, they revealed that as a tribute to the late actor, they will set up a foundation called Sushant Singh Rajput Foundation (SSRF) in his hometown Patna- to support aspiring talents in the fields of cinema, sports and science.

His childhood home in Rajiv Nagar, Patna will be converted into a memorial, which will have his personal belongings including his books, expensive telescope, and flight simulator.

Sushant Singh Rajput's family released an official statement.❤ Here are some important points: 1) "He was simply Gulshan to us" 2) "He cherished every single fan" 3) Sushant Singh Rajput Foundation (SSRP) will be set up to support young talents in areas close to his heart- Cinema, Science, Sports 4) Sushant's childhood home in Patna will be turned into a memorial. His books, telescope, flight simulator and other things will be kept there. 5) The family will maintain his Facebook, Instagram, and Twitter accounts as legacy accounts. 6) The email for #SushantSinghRajputFoundation is ssrliveson@gmail.com . . . #sushantsinghrajput #rip #restinpeace

''The world's Sushant Singh Rajput was simply Gulshan to us.

He was free-spirited, talkative and incredibly bright. He was curious about just everything. He dreamed without restraints and chased those dreams with the heart of a lion. He smiled generously. He was the pride and inspiration of the family. His telescope was his most prized possession, through which he fondly gazed at the stars.

He truly loved and cherished every single one of his fans. We thank you for showering our Gulshan with so much love.

To honour his memory and legacy, the family has decided to set up Sushant Singh Rajput Foundation (SSRF) to support young talents in areas close to his heart - cinema, science and sports.

His childhood home in Rajiv Nagar, Patna, will be turned into a memorial. We will put his personal memorabilia and belongings there, that include thousands of books, his telescope, flight-simulator etc, for his fans and admirers. From now on, we intend to maintain his Instagram, Twitter and Facebook page as legacy accounts to keep his memories alive.

We once again, thank you all for the thoughts and prayers."

Sushant died by suicide on June 14 and was found dead at his Bandra residence. His last rights were performed in Mumbai, and his ashes were immersed in River Ganga in his hometown Patna by his family members. A few days back a prayer meeting was organised for him at his house. Meanwhile, investigation in the untimely demise of the actor is currently underway.