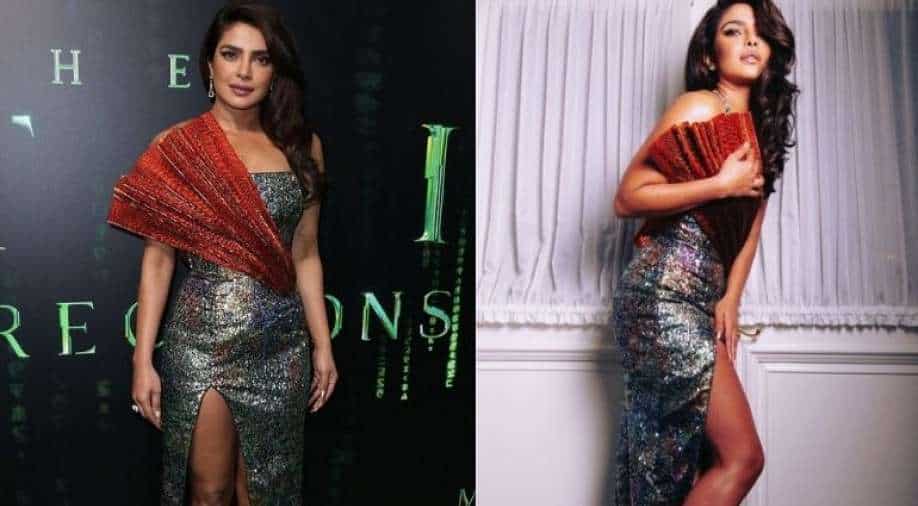 The fourth film of the franchise, 'The Matrix Resurrection' is scheduled to release in India on December 22.

Priyanka Chopra rarely disappoints us with her sartorial choices.

The global star, who is all set to make her debut in the iconic Matrix franchise, recently attended the San Francisco premiere of The Matrix Resurrections.

For an event, PC looked nothing short of a boss lady in a shiny off-shoulder gown by Halpern. The 39-year-old actress made heads turn with her dazzling look in a shimmery off-shoulder gown featuring futuristic details in multiple shades.

Chopra paired her thigh-high slit dress with a pair of pointed-toe pumps that coordinated perfectly with her dress. Chopra, who will be seen playing the grown-up avatar of Sati also paid a small tribute to her character from her dress. The movie star accessorized her look with a stunning earring and a couple of rings and her double-winged eyeliner was just perfect.

Sharing photos of her in the stunning outfit, Chopra wrote, ''What a night! The Matrix premiere! Also @luxurylaw brought it! The colors of my dress are an ode to my character in the film, Sati. I can’t wait for all of you to meet her!!''

''So proud of this cast and crew. What an honour. Thank you Lana,'' she added.

The cast is back together 18 years after the third film and features returning Keanu Reeves and Carrie-Anne Moss to reprise their roles as Neo and Trinity respectively, Jada Pinkett Smith as Niobe, with new additions including Jonathan Groff, Priyanka, Christina Ricci and Jessica Yu Li Henwick.
The movie was co-written, directed and produced by Lana Wachowski, who co-directed and co-wrote the three previous films with her sister Lilly Wachowski.

The first 'Matrix' movie hit the big screens in 1999 and instantly became a phenomenon. A sequel titled 'The Matrix Reloaded' and the third instalment 'The Matrix Revolutions', later followed. The franchise follows Reeves' character Neo and a series of heroes as they fight against machine overlords who have imprisoned human beings in an ultra-realistic virtual reality.

The fourth film of the franchise, 'The Matrix Resurrection' is scheduled to release in India on December 22.