Priyanka Chopra and Nick Jonas get 'The Simpsons' treatment 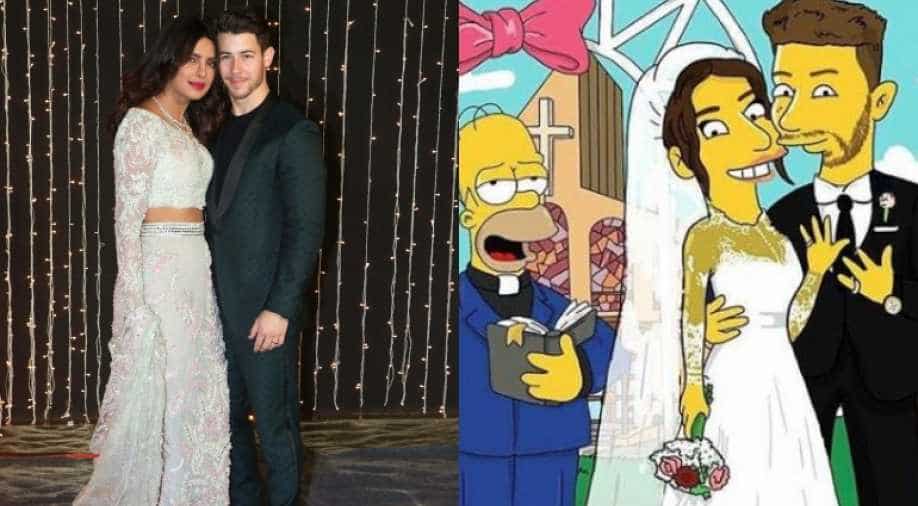 The couple's wedding has inspired illustrators Stefano Monda and Rino Russo to give the couple 'The Simpsons' treatment.

Priyanka Chopra and Nick Jonas' fairytale wedding earlier in December captured the imagination of people world over. The couple tied the knot in Jodhpur and celebrations continued for 5 days in Umaid Bhawan Palace in Jodhpur making it almost like a royal wedding.

Now, the wedding has inspired illustrators Stefano Monda and Rino Russo to give the couple 'The Simpsons' treatment. The illustrators have drawn the couple, dressed in their wedding attires as part of the Simpsons world.

The couple had two wedding ceremonies and similarly, their 'Simpson' versions have also been drawn in two wedding attires. In one Nick and Priyanka can be seen wearing traditional Indian clothes- similar to what they wore for their Indian wedding ceremony while in the other the two are seen exchanging vows at the First Church of Springfield officiated by Homer himself.

While both the illustrations have been loved by the fans and even Priyanka who shared them on her social media page, the couple is not going to be a part of the show anytime soon.

Priyanka and Nick hosted a big bash in Mumbai on 20th December for Bollywood. Almost all the big stars were in attendance at the party including Ranveer Singh, Deepika Padukone, Katrina Kaif, Anushka Sharma, Salman Khan and others.