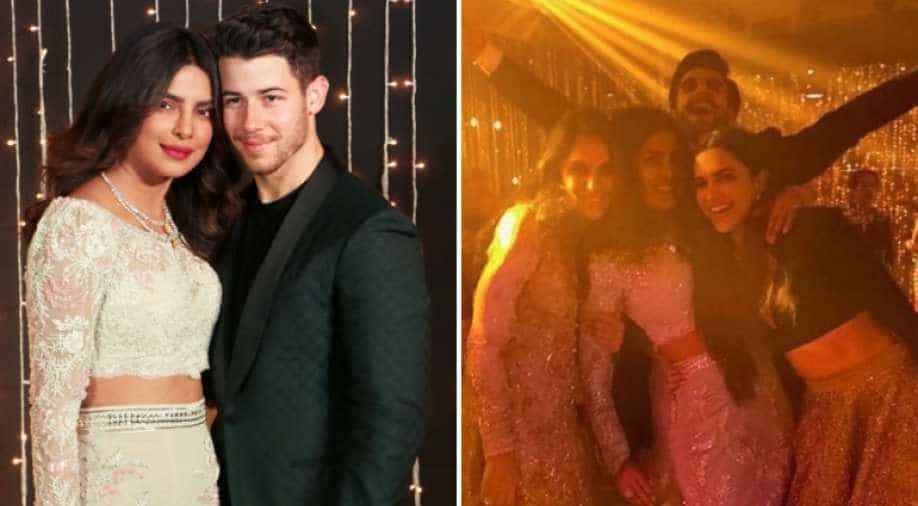 Priyanka Chopra and Nick Jonas threw a final reception for Bollywood on Thursday night and who's who of the industry turned up to wish the couple.

Priyanka Chopra and Nick Jonas threw a final reception for Bollywood on Thursday night and who's who of the industry turned up to wish the couple.

From Asha Bhosle to Hema Malini to Katrina Kaif to Janhvi Kapoor- stars truned up in their traditional best to wish their very own 'Desi Girl' the very best.

Priyanka and Nick looked much in love as they posed for the paps and quickly headed inside to dance the night away with another newly married couple- Ranveer Singh and Deepika Padukone.

Inside videos and pictures of the bash show Priyanka and Deepika dancing to 'Pinga' from 'Bajirao Mastani'. The original song too had the two actress dancing together. In another video, Ranveer Singh can be seen dancing to the 'Rangeela' title track with actress Urmila Matondkar.

Get me in sis I will rock with baba and make one full documentary for the world to enjoy 😎. Now that #ranveersingh is in the house the place is going to rock. @Regran_ed from Bjirao Mastani Cast on the floor

Psychedelica baba has taken over the party completely . But his documentary maker is home sulking 😫. #urmilamatondkar on the dance floor with #ranveersingh #priyankakishaadi #bigfatindianwedding #desibride #indianwedding #priyankachopra #nickjonas ❤️❤️❤️❤️ @viralbhayani

#ranveersingh takes over the dj console as #deepikapadukone and @sandeepkhosla hit the dance floor.

Dressed in an ice-blue lehenga choli by Abu Jani-Sandeep Khosla, Priyanka glowed as she made her husband, Nick, match steps with her to hit song 'Desi Girl'.

Congratulation @priyankachopra & @nickjonas Mr C couldn’t make it as he was shooting ❤️ Thank u all for being so warm, welcoming & hospitable. I really had a great time.

A post shared by Upasana Kamineni Konidela (@upasanakaminenikonidela) on Dec 21, 2018 at 4:25am PST

The function saw some of the most unexpected guests appear including Salman Khan (who was said to be upset with Priyanka after she walked out of his film ‘Bharat’ citing personal reasons), Katrina Kaif, Anushka Sharma, Deepika Padukone and Ranveer Singh, Kangana Ranaut among many others. Shahid Kapoor and Mira Rajput also walked in, much to everyone's surprise.