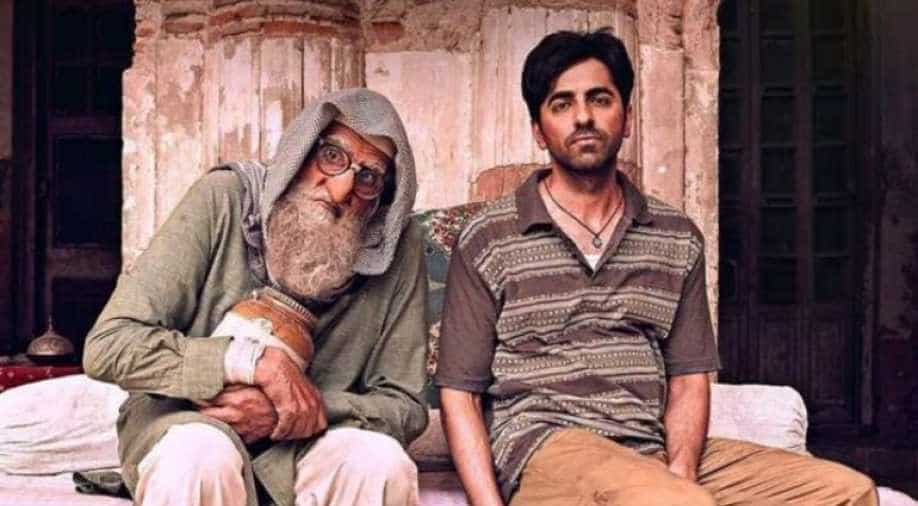 Every filmmaker in the Hindi film industry has at some point in his career thought of a film with Amitabh Bachchan in the lead. Over the years, Bachchan has played characters out of his comfort zone often- making each of these films memorable. But in every character that he plays, his looming star presence tends to peak out. You may enjoy watching him playing a Bhaskar Banerjee in 'Piku' or as Auro in 'Paa' but you know that its Amitabh Bachchan playing a character. In filmmaker Shoojit Sircar's 'Gulabo Sitabo' which premiers on Amazon Prime Video on Friday, the actor sheds his Bachchan-ess and transforms into Mirza, a character that Hindi cinema hasn't witnessed so far.

Mirza is 78, walks with a stoop, and lives in Lucknow's Fatima Mahal, a crumbling haveli that has left its glorious days far behind and which is now inhabited by the owners and numerous tenants who keep the dilapidated place bustling. Mirza's wife Begum(Farrukh Jafar) is the owner and he merely acts as a caretaker at the beginning of the film, but as the story progresses you realise he is a greedy man, for whom the haveli has for long been the only motivation to live. His hindrances in becoming the sole owner are many- first his wife, then his tenant Bankey(Ayushmann Khurrana) who lives with his mother and three sisters and hasn't paid the meager rent of Rs 30 for months. Mirza naturally wants both out of his life and haveli and finds himself squabbling over money with Bankey all day long. 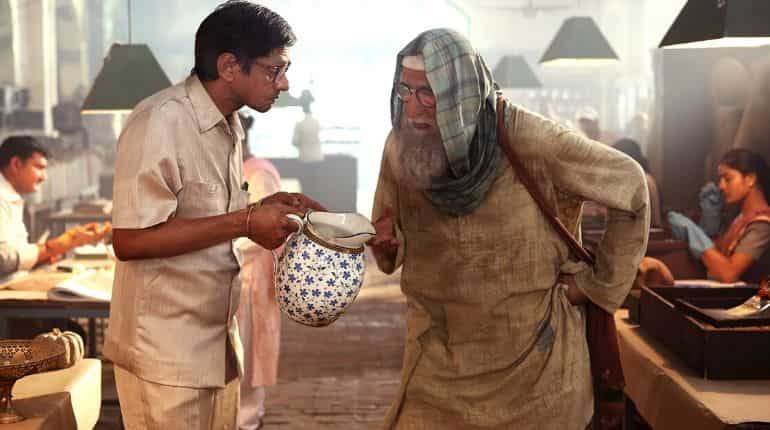 When the film begins it appears to be a story about an uncanny pair- who cannot stand the sight of each other and are at loggerheads at all times. But an hour into the film, you realise it is much more than just about these two individuals. It's a story of greed, of the futility to materialistic needs, of upmanship and of a haveli that everyone wants a piece of. While Mirza calls in a lawyer Christopher Clarke(Bijendra Kala) to get rid of his tenants, Bankey befriends a govt official Shukla (Vijay Raaz) who introduces himself as 'archeology' to trade the haveli for a LIG flat. With multiple players eyeing the peeling, worn off haveli- things naturally get chaotic and unintentionally funny.

Writer Juhi Chaturvedi is known for her nuanced screenplay. She and Sircar have given us films like 'Piku', 'Vicky Donor' and 'October' in the past. In 'Gulabo Sitabo', she keeps the humour sly and never in your face. A lot of the funny moments are situational and come in one-liners in the local dialect. You get a sense of how sweetly the insults are thrown at people in typically Lucknawi andaaz as Mirza and Bankey argue like a married couple with empty threats and hilarious insults, like when Mirza out of disgust calls Bankey 'Dimak kahi ke! (You are a termite').

Bachchan and Khurrana's scenes are crackling. It isn't easy to stand your own in front of Bachchan, but Khurrana matches the superstar in every frame. The two actors play similar characters- both greedy, sullen and upset with life in general, willing to fight and give each other empty threats. Bachchan's character arc is greater and his scope of acting is more but Khurrana still manages to leave an impression. He is not playing his usual role of a common man heroically rising to the occasion. In 'Gulabo Sitabo', Khurrana is clearly out of his comfort zone as a man who is never happy with anything in life, is insecure about his lack of education and awareness, hates his job, and doesn't even get love from his girlfriend who at one point admits she wouldn't be with him if she knew he was poor beforehand.

In a film that has two men playing the leading characters, Chaturvedi also makes the women characters memorable. Be it Bankey's sister Guddo(Srishti Srivastava), or Begum (Farrukh Jafar) or even Bankey's weary girlfriend, the women have a bigger say in matters than the two men and are strong-willed individuals. Srivastav  managed to make heads turn in her brief role in 'Gully Boy' and has been a known face on internet for a while. As the street smart Guddo, she is effective and impressive. 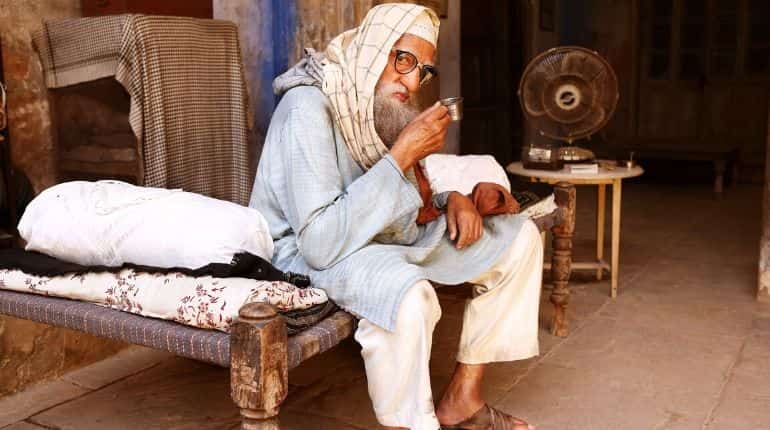 Farrukh Jafar as Begum is outstanding. She shines in her scenes, with limited dialogues but just the right amount of spunk and it is a delight to watch her. The scene where she and Mirza discuss her family is perhaps the high point of the film. So well enacted by both the actors- who are confident of their talent.

The film though belongs to Bachchan. Hiding behind a prosthetic nose, scarf, and a white goatee, Bachchan plays the ever conniving, slightly helpless, greedy Mirza with perfection. His walk, the way he makes his eyes light up every time he plots a new plan to outdo Bankey and his overall demeanor of a man who may physically be crumbling but is relentless in his pursuit- Bachchan gives a masterclass in acting. It's a pure delight to watch the man on screen.

Avik Mukhopadhyay, who has collaborated with Sircar previously captures Lucknow and the dilapidated haveli beautifully in his frame. The city and the haveli are important characters of the film, highlighting the lost glory of a wonderful era. Shantanu Moitra's background music is haunting and beautiful.

This is not Juhi Chaturvedi's best work. While she aces with her witty lines, her screenplay meanders. My only problem with the film was that it takes time to establish the plot. Its pace is leisurely and at the 2 hours runtime, the film appears a bit stretched. Sircar ultimately relies on his performers to narrate a layered satire and they do not disappoint. 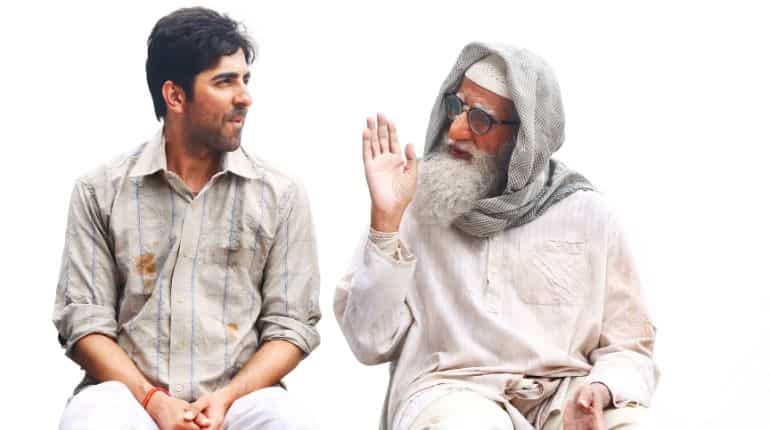 The title 'Gulabo Sitabo' is based on popular folklore of two women by the same name who keep fighting over petty issues much like the two leads. Khurrana and Bachchan are great. So is the supporting cast that includes Raaz and Kala play the quintessential small-town govt officers to the hilt. The film though can be best enjoyed if you are aware of Lucknow or any other similar city in North India functions. The nuances are typical of a city that for centuries has been steeped in culture and now struggles to form a modern identity.

Sircar's film is the first major Bollywood film to have opted for the digital route amid the pandemic. There is naturally a lot of curiosity around it. One can't help but wonder how the film would have been received had it got a theatrical release because it doesn't offer a universal palate- instead, it unravels with multiple subtext and sly humour.