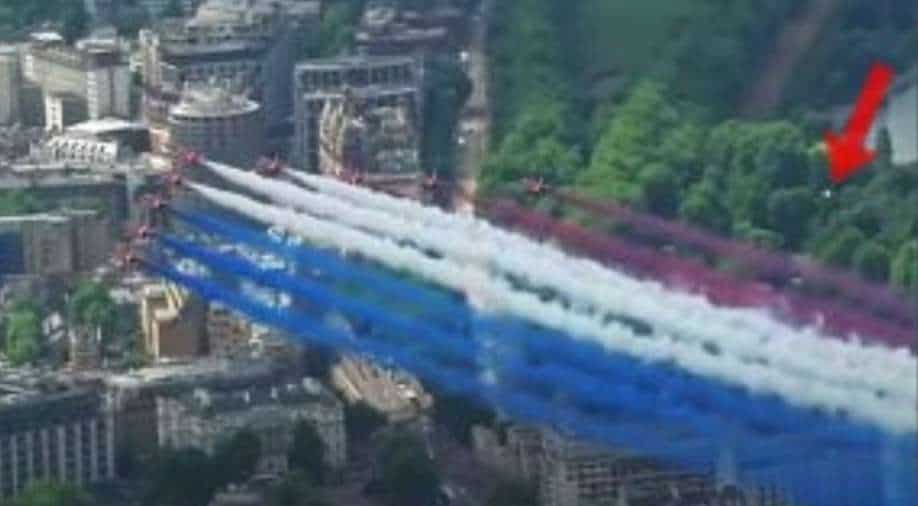 When an eagle-eyed netizen shared a clip of the flypast showing the UFO, the chatter began about the incident on social media. In the footage, people could witness a fuzzy image of an unidentified flying object (UFO)

Queen’s Platinum Jubilee celebrations recently were a starry affair. Well, quite literally as along with the royals and other celebrities, it seems a UFO was also spotted by eagle-eyed netizens during the celebrations. Some users are convinced to have seen a UFO flying across the sky. During the official footage of the nine-plane flypast, one can witness an anomaly. The nine planes flew in formation and left behind a colourful trail of red, white and blue smoke. The internet users believed it to be an unscheduled activity of a 10th aircraft. In the footage, people could witness a fuzzy image of an unidentified flying object (UFO). It is seen zooming in the sky behind the planes.

Apparently there was a UFO at the queen of England's jubilee...shiiii I see something pic.twitter.com/WrwMUFz3kf

When an eagle-eyed netizen shared a clip of the flypast showing the UFO, the chatter began about the incident on social media. A user wrote, “Just watched the BigJetTV angle again, this goes WAY too fast to be a drone or balloon in the wind. I'm inclined to say this is a genuine [Unidentified Aerial Phenomena]."

Another user said, “...4th dimensional object passing through 3-dimentional space would look like a sphere to 3-dimensional beings. Some netizens have also dismissed the claims of UFO and call it to be to be a bird or drone.

Watch: Decoding UFOs: What do we know about ‘flying saucers’?

When is Eid al Adha 2022 in Dubai and across UAE? Holidays, prayer timings, covid celebration guidelines

Trick your palate, make up later: Balance your diet for better results