Watch: Aerobics instructor does her routine as Myanmar coup dramatically unfolds behind her 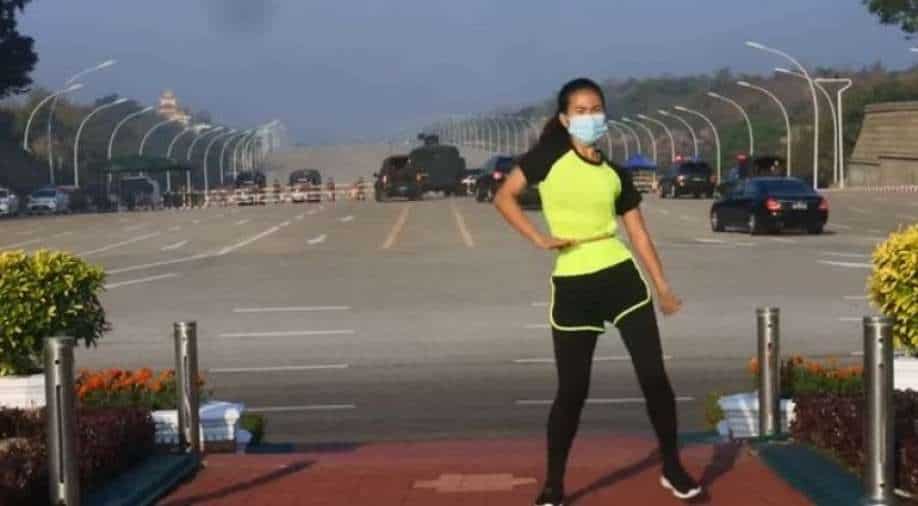 An aerobics instructor unwittingly captured the first moments of Myanmar's dramatic coup in her dance video on Monday morning.

Talk about dedication! An aerobics instructor unwittingly captured the first moments of Myanmar's dramatic coup in her dance video on Monday morning. The viral video shows the woman doing her dance routine in the capital Naypyidaw in front of what appears to be the entrance of Myanmar's parliament.

Seconds later, as she continues with her workouts, the video shows black SUVs drive up behind her to security checkpoint on the road leading to the Assembly of the Union complex.

The dancer, identified as Khing Hnin Wai, continues to do her workout routine in front of the camera, unaware of the convoy behind her.

At one point, as the tempo of the music increases, she even makes small punching motions – as series of black cars behind her halt briefly. Then, as she moves side to side, men behind her can be seen rushing to open the barricade and let the cars through.

Khing Hnin Wai posted the video around 3 am on Tuesday confirming that the video was real and revealed that she had been filming dance videos outside the assembly for the last 11 months.

The full video is available on her Facebook page and she identifies herself as a physical education teacher. As the video begins, sirens can be heard in the distance before the convoy appears in the background. Needless to say, the video has gone viral since then and many have compared it to the dystopian TV show 'Black Mirror'. There are also memes doing rounds of the internet which show Khing Hnin Wai doing her routine in front of other historical moments including the recent US Capitol Hill siege.  ×

Kind of a perfect video of the decline of human civilization. https://t.co/8bSZySEgKl

This remix is so good. And like. Khing Hnin Wai deserves a trophy. Tell me you wouldn’t want her in your online covid exercise classes. That is a teacher that will keep everyone calm. And carrying on. https://t.co/pqA5ChN69y

A viral video of a woman doing aerobics class to the tune of Indonesian hit song “Ampun Bang Jago” in Myanmar, apparently without realizing a military convoy arriving at parliament behind her and a military coup happening.
ht @Vinncent pic.twitter.com/mK4UYUp0Gv

Reports said Myanmar military has taken control of the country for one year after the country's governing National League for Democracy (NLD) said that leader Aung San Suu Kyi and other senior figures were detained on Monday.

What is quiet quitting and why is it trending?