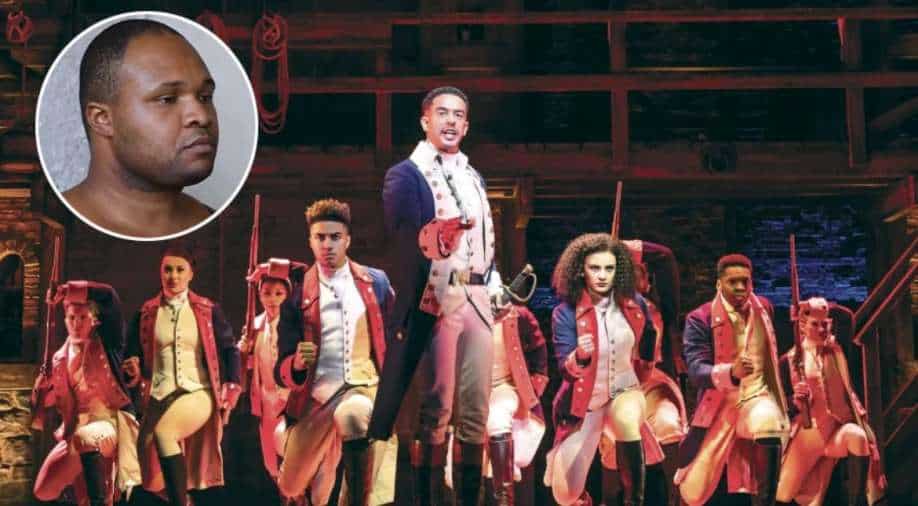 Suni Reid (inset); and the cast of Hamilton on stage Photograph:( Twitter )

Hamilton musical is the 'beacon of diversity' only in 'public', said trans actor Suni Reid.

A transgender member from the cast of 'Hamilton' musical had alleged that they were fired from the hit show after asking for a gender-neutral dressing room.

According to a discrimination and retaliation complaint filed by Suni Reid--who is Black, nonbinary, and uses the pronouns they/them--said that they were "cast out of Hamilton when the Company's management refused to renew their contract shortly after they requested that the performers have a gender-neutral dressing room in addition to the ones for men and women."

The complaint further accuses the production of treating them unjustly. They said they "experienced frequent incidents of discrimination and harassment" that involved being purposely misgendered that was mainly because of using a male dressing space.

"Publicly, Hamilton is a beacon of diversity and appears committed to causes seeking social justice and harmony. Behind the curtain, however, the company's management will force out a Black, transgender cast member simply because they stood up for themselves and advocated for a more equitable workplace, and therefore called that public image into question," Reid's attorneys, Lawrence M. Pearson and Linsday M. Goldbrum, said in a statement to EW. "We look forward to upholding Mx. Reid's rights and hope this is a wake-up call for the theater industry about the systemic inequities that persist even at its greatest heights," read the complaint document, according to reports.

Reid joined Hamilton as a cast member in 2017 and has performed in the Los Angeles, Chicago, and Broadway productions of 'Hamilton'. During their time with the team, Reid has reportedly covered many roles that included lead roles such as Aaron Burr, George Washington, Hercules Mulligan/James Madison, and Lafayette/Thomas Jefferson.

According to reports, a gender-neutral space was eventually made by partitioning off a section of the dressing room, which Reid reportedly claims did not meet their expectations or the expectations of the Los Angeles transgender regulations.

Later, Reid alleges that Hamilton 'terminated its contract (and) the only explanation is that Mx. Reid was punished for making legally protected complaints and requests to the Company'.

"Suni Reid was a valued cast member for more than three years. We offered them a contract to return to Hamilton with terms responsive to their requests. We deny the allegations in the charge. We have not discriminated or retaliated against Suni. Since the shutdown, our organization has taken care of our community. We have treated Suni with the same respect and consideration as all the company members of Hamilton. Specifically, we have given Suni direct financial support, paid for their health insurance, and paid for their housing. We wish Suni well in their future endeavors," a spokesperson for Hamilton said in a statement.