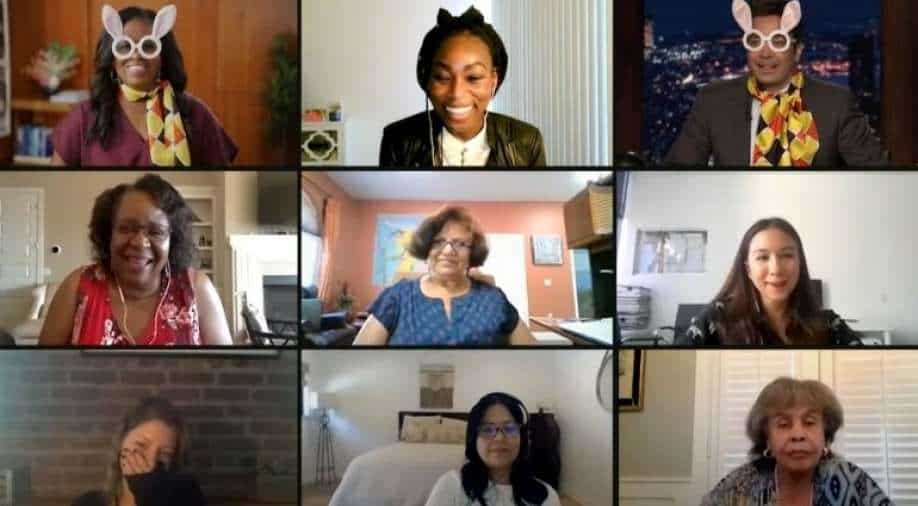 In a clip from the latest episode of The Tonight Show, the duo drop in on unsuspecting Zoom-ers during their calls, much to the callers' delight and surprise.

Trust Michelle Obama and Jimmy Fallon to come up with the most hilarious ways to amp up their interactions.

This time, the duo, who have previously pranked many during their chat, took to Zoom to gate-crash several classes and surprise the attendees.

In a clip from the latest episode of The Tonight Show, the duo drop in on unsuspecting Zoom-ers during their calls, much to the callers' delight and surprise.

At one point, they pop up in a call with Obama holding up a copy of her book, Becoming, while Fallon holds up former President Obama's book, A Promised Land. "Wrong book, Jimmy!" she says. They also show up in matching bunny costumes and crash yet another Zoom as lost musicians looking for band practice.

Michelle stopped by The Tonight Show for the fifth time to chat with Fallon about her new Netflix show, 'Waffles and Mochi, and also talk to the late-night host about her famous family.

Michelle Obama opens up about relationship: Sometimes wanted to push Barack out of the window

Michelle Obama, while speaking to an entertainment website, reacted to the interview and said, "My hope is that, when I think about what they're going through, I think about the importance of family and I just pray that there is forgiveness and there is clarity and love and resolve at some point in time. Because there's nothing more important than family."