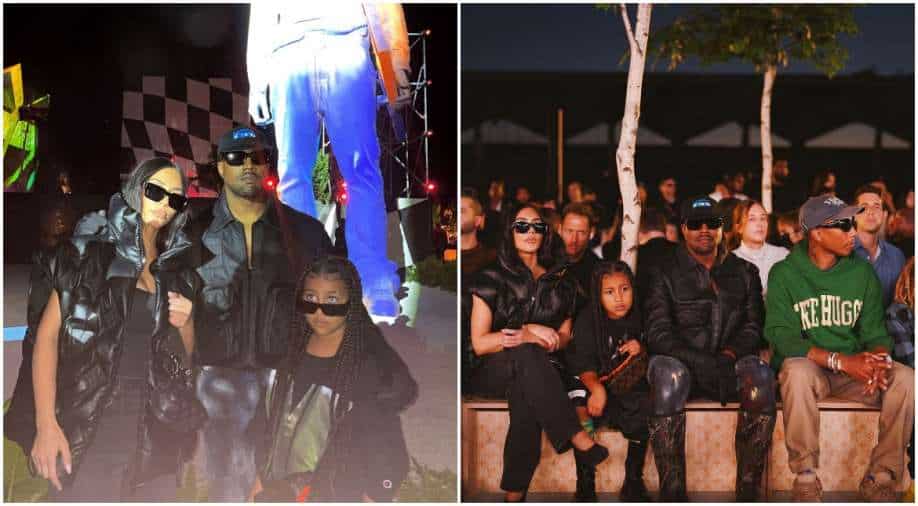 Kim Kardashian and Kanye West were at the front row for Virgil Abloh’s final show, which was an ode to the designer’s life and legacy, at Miami’s Marine Stadium with daughter North.

Kim Kardashian and Kanye West put their differences aside as they come together for late designer Virgil Abloh’s final show for Louis Vuitton in Miami.

The estranged couple, with daughter North West, paid homage to Abloh at his Spring-Summer 2022 Collection in Miami on Tuesday, which was his final presentation for the brand he was with.

Kardashian and West were at the front row for Abloh’s final show, which was an ode to the designer’s life and legacy, at Miami’s Marine Stadium with daughter North.

Reports suggest there was no apparent awkwardness between the estranged couple. Kim is dating Saturday Night Live star Pete Davidson while West has been openly talking about reuniting with her and bringing the family together, again.

Virgil Abloh was the founder of streetwear brand Off-White and also a DJ. He died at the age of 41 on Sunday following a private, two-year battle with cardiac angiosarcoma: a rare form of cancer.

The designer was a frequent collaborator with West and has also worked as creative director for the rapper’s design agency Donda. He had also art-directed the cover artwork for West’s albums 'My Beautiful Dark Twisted Fantasy' and 'Yeezus'.

After the launch of his own label, Abloh became a household name in luxury streetwear and was signed to run Louis Vuitton’s menswear division in 2008.

In a post on the brand’s Instagram page, Michael Burke, Louis Vuitton’s chairman and CEO, talked about Abloh's wish to carry on.

“Virgil was not only a friend, great collaborator, creative genius, visionary and disruptor, but also one of the best cultural communicators of our times … He was an eternal optimist who believed anything was possible. In this same spirit, we at Louis Vuitton will proudly continue to celebrate his legacy with a final show in Miami, per his wishes," read the post.

Abloh’s family revealed on social media that he chose to keep his diagnosis to himself while “undergoing numerous challenging treatments" and continued to work in the field of fashion.

Also read: Most watched movie of all time? It's none other than Dwayne's 'Red Notice'

“Through it all, his work ethic, infinite curiosity, and optimism never wavered. Virgil was driven by his dedication to his craft and to his mission to open doors for others and create pathways for greater equality in art and design. He often said, ‘Everything I do is for the 17-year-old version of myself,’ believing deeply in the power of art to inspire future generations, " read another part of the post.

As for Kim's romance with Davidson, a source told an entertainment portal, “She’s (Kim Kardashian) acting like a teenager. She’s constantly giggling. Pete has made her feel like the clock has moved 20 years back. She seems happy."

“He’s so funny and is a really good person. All of the friends love him. He’s the sweetest person,” the source said of Davidson.

Meanwhile, on last Thursday, Kanye West dropped a five-minute video he titled as "Thanksgiving Prayer 🕊." The video sees a choir in black hoodies singing in a poorly lit warehouse and there are socially distanced guests sitting in chairs.

Kanye cannot be seen in the video but one can hear his voice as he touches upon a variety of topics. He owns up to the mistakes he says he's made in the past: that range from embarrassing Kim and his family by running for President to his out-of-control drinking that led to multiple 'manic episodes'.

"All I think about every day is how I get my family back together and how I heal the pain that I've caused. I take accountability for my actions. New word alert: misactions. The one thing that all my successes and failures have in common is me," he said.

Kanye admitted that he would drink "to take the stress away and knock the edge off," but it did more harm than good.

"Drinking affected my health and the health of people around me because I already had a hair trigger temper and this just heightened it. I went into a manic episode in 2016 and I was placed under heavy medication. Since then, I went on and off the medication, which left me susceptible to other episodes, which my wife and family and fans have had to endure," he explained.

As for embarrassing his family, Ye said, "Good Lord my wife did not like me wearing the red hat. Being a good wife she just wanted to protect me and our family."

"I made me and our family a target by not aligning with Hollywood's political stance, and that was hard for our marriage. Then, I ran for president without proper preparation and no allies on either side. I embarrassed my wife in the way that I presented information about our family during the one, and thank God only, press conference," he said.