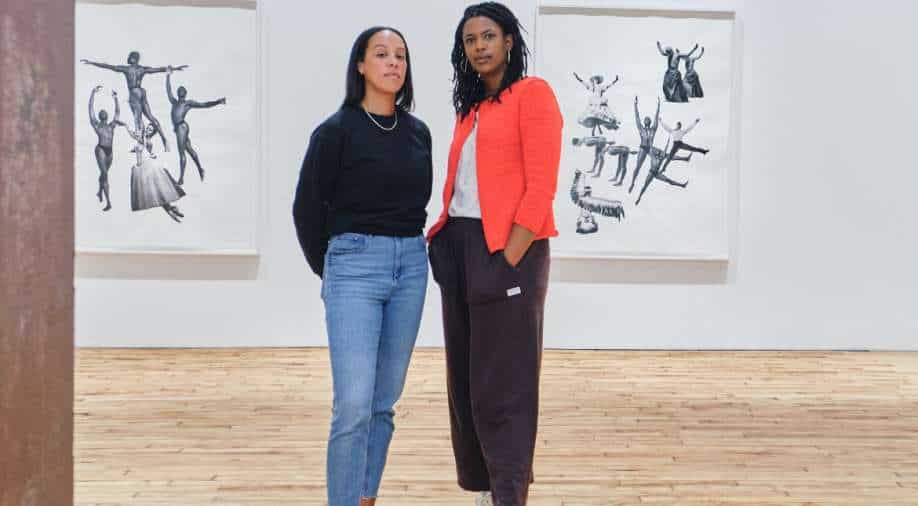 The exhibition keynotes an experimental, even exacting, program that curator Ebony Haynes has set for 52 Walker, a kunsthalle-like venue where shows will run for several months.

Dance is both the central theme and a lens to inspect contemporary culture in “Kandis Williams: A Line,” the debut New York solo exhibition of the multimedia artist and the inaugural presentation of 52 Walker, the new space that the David Zwirner gallery has opened in Tribeca.

Large-scale collages on grid-lined paper mingle archival photographs of dancers and choreographers — some recognizable to aficionados, such as Alvin Ailey, George Balanchine and Martha Graham — with photographs Williams made in her studio. There, she worked with three Black dancers versed in ballet and modern dance, exploring how they have learned within but also resisted the enduring racial and gender conventions of their training. Some of the collages are marked with annotations, the artist thinking out loud about affect, performance and politics.

A video installation, presented on six squat old-school monitors, shows a dancer following lines on a studio floor, working through routines that Williams choreographed, as archival video flickers on a background screen within each screen. Tall plants set about the gallery appear to break the theme, but on close inspection, they are artificial, some leaves imprinted with eyes or colored in flesh tones, returning attention to the body.

Williams, 36, grew up in Baltimore and lately has divided time between Berlin and Los Angeles, where she recently won the Hammer Museum’s $100,000 Mohn Award. She is an artist who draws connections; her first museum solo, recently at the Institute of Contemporary Art at Virginia Commonwealth University, explored migration, tobacco plantations, prison farms and tango. An inveterate researcher, she shares sources and intellectual inspirations in photocopied readers and zines she publishes through Cassandra Press, the imprint she co-founded. Later in the run, the exhibition will add a library area where visitors may browse or borrow pertinent texts.

The exhibition keynotes an experimental, even exacting, program that curator Ebony Haynes has set for 52 Walker, a kunsthalle-like venue where shows will run for several months. We visited with Williams and Haynes to talk about dance history, the foregrounding of Black dancers in today’s popular culture, and Williams’ growing interest in choreography. The conversation has been condensed and edited.

Siddhartha Mitter: Kandis, what drew you to examine dance so closely now?

Williams: Dance is so reflective of social scripts and social impulses that we don’t feel that we have to name but that become wrapped in characters and fictions and passed along as mimetic educational tools for how we are supposed to interact.

And we’re in a moment right now. Last year saw a proliferation of us, especially in Black communities worldwide, trying to disassociate and disidentify from caricature, state-sanctioned violence, social scripts that have been destructive to our community. And I don’t think it’s coincidental that we now see, in our art markets and commercial markets, a renewed interest in positioning Black bodies and dancers. Black TikTokers, for example, are pervasively appropriated.

Williams: The rush of diversity and inclusion campaigns has put performing Black bodies in places that have to negotiate racist performative expectations and anti-racist sentiments simultaneously. [Dance scholar] Brenda Dixon Gottschild says that the Black body keeps the measure of popular culture.

Mitter: Your new collages have titles that abound with references to dance history and ideas. One includes the line “Between cult and theater lies the stage as a moral institution.”

Williams: That’s a quote from Oskar Schlemmer, the theorist and propmaster of the Bauhaus theater. When he calls the stage a moral institution, it raises the question of how indebted our social structures are to the lines of the modern theater — and by extension media, which has become a stage. The scholar Katherine McKittrick demonstrates how much visual hierarchy goes back to the trans-Atlantic slave trade, and how as a result almost every unit of popular measure is some evidence of white supremacy, and thereby some level of erasure. Shakespeare says all the world’s a stage, but whose stage?

Mitter: The collages include photographs you made of three dancers you worked with: Catherine Kirk, Damond Garner and Natasha Diamond-Walker. What did that interaction consist of?

Williams: I brought them into the studio, and we talked through what forms and shapes their bodies fit, what techniques they’ve been versed in. I think it’s a common conversation in dance that maybe Black dancers and Black body types have certain phenotypic traits that deem them better suited to certain roles or positions. We thought through what their bodies have to go through, or feel, in certain attitudes or techniques.

Mitter: So you’re thinking of the way they’ve been trained —

Williams: And the accumulation of that training. When I’m directing, I’m sort of directing within that index of muscular and reflexive conditioning. But I’m also working with a person, a person who might hurt themselves in certain attitudes or techniques, or who might really enjoy the pain of certain positions.
Burke: In the video installation, Natasha Diamond-Walker moves across a stage marked with lines. How did you generate the movement?

Williams: Those are all very particular movements. Each, literally point A to point B, is a set of three movements that hit the center, turn into another movement and then finish at the end of the line. I’m using a host of vernacular dance movements: for example, take a part of the [Native American] Buffalo Dance, into a particular kind of jazz motif, into a tree pose. Relying on Natasha’s Martha Graham training, we built a choreography that was both concise and hybrid.

Burke: You went into this show with the idea of creating a dance notation — a system of symbols for documenting movement — but ended up going in a different direction.

Williams: The idea of a notation is such a fraught space. Because notation so often denies the interiority of the dancer — it flattens the entire experience to the dynamics of the stage. So what I’m kind of doing here is riding the two sides of that line: a notation that could maybe contemplate the dualism of the experience of being a performative Black body.

I feel like with this show, I’ve crossed the stage. It’s going to be nice to do more choreographic and performance work.

Mitter: Your projects involve extensive and time-consuming research. What are some of your sources for the dance work?

Williams: I’m kind of married to this practice at this point, so it feels like good quality time. The Jerome Robbins Dance Division [of the New York Public Library] has been really great. The Library of Congress, the Smithsonian Archives of American Art — I’m trying to shout out my sources! Jacob’s Pillow has a really cool interactive dance website.

Mitter: Ebony, how does “A Line” set the tone for the program you want to build?

Haynes: As a director and curator, this is what you work for — to work with artists that you respect, and learn something along the way. Nothing’s tied up in a fine bow at the end; that’s not what I’m striving for. I’m trying to do something that hopefully affords more time to produce but also to be in the space. I want to invite people to come in, talk with me, sit with the work. You see it once, but maybe you come back and see it again.