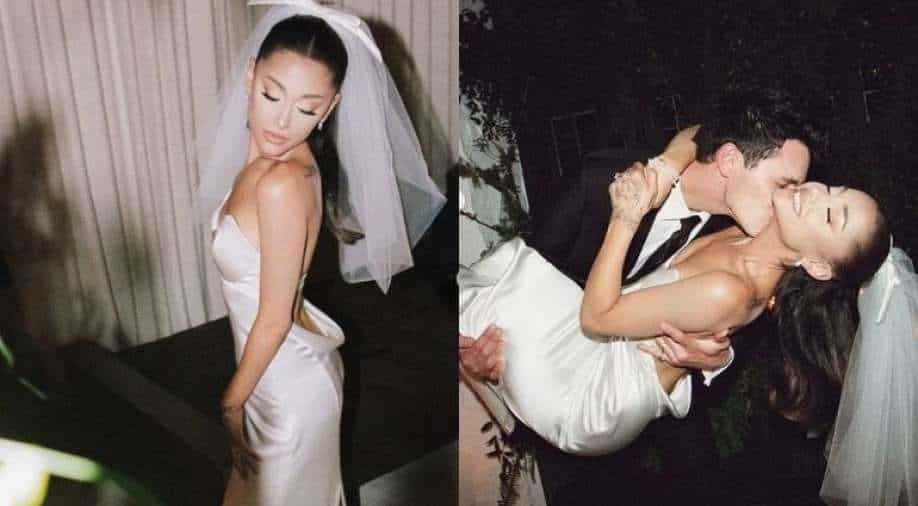 Ariana and Dalton who began dating in early 2020 got engaged just before Christmas 2020.

Earlier this month, Arian Grande surprised the world with her dreamy picture of her wedding with real estate agent Dalton Gomez.

Ariana was looking adorable in her intimate wedding photos that took place at her home in California, but very few of us noticed that Gomez wore one earring upside down for her walk down the aisle on May 15.

The bride wore a Lorraine Schwartz's Pearl and diamond earrings that were matching with the bride’s engagement ring, Vogue states. Turns out it was a nod to Ariana's aesthetic that started during the Sweetener era, which featured an upside-down cover photo.

The meaning behind this is significant to Ariana, as it represents appreciating the lowest or the “upside down” moments in her life and how they have contributed to where and who she is now, the outlet reports.

For the night, Ariana chose to wear a custom lily-white, silk charmeuse, empire-waist column gown by Vera Wang. In the same Vogue feature, we also learnt that Ariana and Vera had made a very important and special pact: On Met Gala few years back, Vera promised that when the time came, she would create Ariana’s wedding-day look…and the iconic designer kept her promise.

Ariana and Dalton who began dating in early 2020 got engaged just before Christmas 2020.