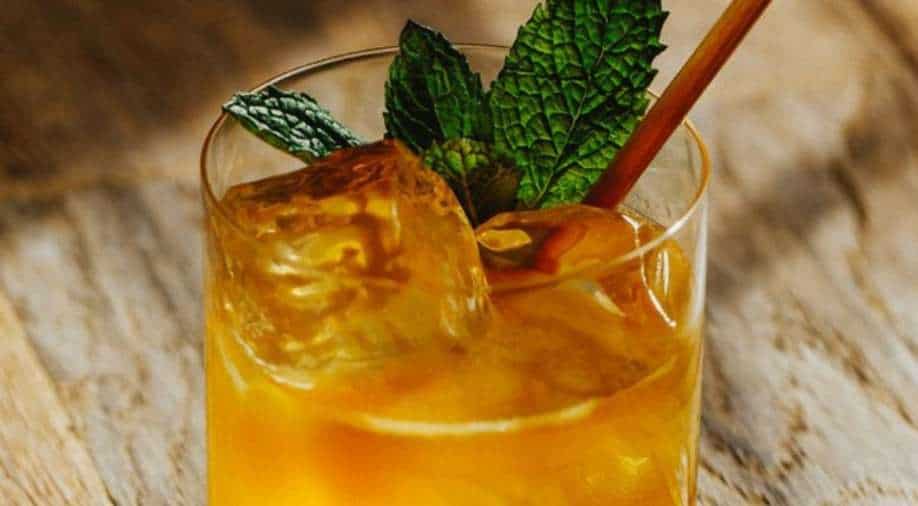 Making cocktails is an art. Representative image of a a cocktail. Photograph:( Twitter )

“The Oxford Companion to Spirits and Cocktails” is an enormous and authoritative work of scholarship, nearly a decade in the making. The book covers, in about 1,150 entries across 834 pages, nearly every aspect of its subject matter, from absinthe spoons to maceration to the Zombie.

Do you know what a “boomerang” means in bar terms?

Before I read “The Oxford Companion to Spirits and Cocktails,” edited by David Wondrich with help from Noah Rothbaum, I didn’t. Now I do, and the information has cheered me up considerably.

A boomerang is a drink sent by a bartender in one bar to a bartender in another. The glass will be sealed with cling wrap and, because the practice is more or less illegal, tucked into a paper bag or go-box. Customers act as couriers.

The name derives from the fact that if you send a nice drink to your cocktail-vending friend, you’ll probably receive one in return.

“The Oxford Companion to Spirits and Cocktails” is an enormous and authoritative work of scholarship, nearly a decade in the making. The book covers, in about 1,150 entries across 834 pages, nearly every aspect of its subject matter, from absinthe spoons to maceration to the Zombie.

You enter as if through batwing saloon doors. Buy a copy for the curious drinker in your life and perhaps he or she will boomerang one back to you.

Wondrich, a former English professor, is a longtime drinks historian and writer, notably for Esquire. His books include “Imbibe!” (2007), which was the first cocktail book to win a James Beard Award.

He has been a key player in the cocktail renaissance of the past few decades, alongside such figures as mixologist Dale DeGroff and bar owner Audrey Saunders, both of whom contribute to this book. In a properly run country, DeGroff’s face would be on a postage stamp.

If your bar now uses fresh juices and decent spirits, your restaurant has a cocktails list and your liquor store carries 60 varieties of whisky — spell it without the “e,” this book insists — where it once carried six, Wondrich and his 150 contributors deserve a measure of thanks.

As one participant, Lauren Viera, writes, “once a person has had a truly well-made cocktail, it’s hard to go back.”

If this movement has spun off some preachiness and pretension (waxed mustaches, affected tattoos, pinstripe vests, cutesy drink names, inflated bills), it has been a small price to pay.

Some of the material in “The Oxford Companion to Spirits and Cocktails” is relatively heavy going. There are entries on, for example, charcoal filtration, cryoextraction, heat exchangers, sour mash and water-bath stills. The vagaries of distillation cover nine pages. Long and sometimes sleepy essays cover the world region by region. The new makeup is meant to be seen

These passages will allow you to convince yourself, and perhaps even your spouse, that your interest in getting wasted is an academic pursuit.

For every such entry, however, there’s a tight, witty profile of a forgotten bartender or a remote but brilliant bar from the 1930s or a neglected writer or a spirit worth investigating. Classic cocktail recipes are revised and updated.

Gleanings, such as garnishes, are tucked in. In the entry for Galliano, the sweet herbal liqueur, for example, we learn why it’s a must-have in bars: The long-necked bottle is ideal to grab when a bartender needs impromptu self-defense.

Here are some things at which this book looks askance: alcopops, the Alexander Cocktail (for those “who have just been taken off stick candy,” one guidebook said), blenders (unless in careful hands), stunt garnishes (i.e., skewered cheeseburgers on a Bloody Mary) and hot buttered rum, overrated because, as Wayne Curtis writes, “the butter often leaves a slick.” Black women make waves in hair care

The editors are also opposed to “flair” bartending, of the sort Tom Cruise demonstrated in the 1988 movie “Cocktail.” The exception to this rule, I would stipulate, is Sam’s ability, in “Cheers,” to slide a glass of beer around the corner of his bar.

Among the things this book admires: Laird’s Bonded Apple Brandy; using dense, very cold ice; knowing how to “spank” an herbal garnish; understanding the variety of ways to shake and stir and roll and toss; and having a firm handle on muddling, layering, swizzling.

The martini is considered at length. I like mine shaken because they always seem colder and because the ice crystals that swim briefly on the surface are ethereal. I also like mine extremely dry.

I was secretly pleased to read, in the 2018 New York Times obituary of Tommy Rowles, a longtime bartender at Bemelmans Bar, that his secret was to omit vermouth entirely. “A bottle of vermouth,” he said, “you should just open it and look at it.”

Modern cocktail orthodoxy is not kind to me, or to Tommy. Saunders complains, in an entry on atomizers that spray a mist of vermouth, about those who “mistakenly believed that the best martinis should contain only a whisper of vermouth.”

As to shaking versus stirring, Saunders is cagey about whether “bruising” gin is a thing, but you lose silkiness if you shake, she argues, and worse, you get bubbles and overdilution. Saunders is among my heroes, but here we momentarily part ways.

I sometimes pick up a new book and think about all the cups of coffee, trips to the bathroom and nose-picking that attended the writing of it.

Holding this book, I thought of the mornings after. If I have one complaint, it’s that there is no entry titled: “Hangover, the.”

'The Oxford Companion to Spirits and Cocktails'