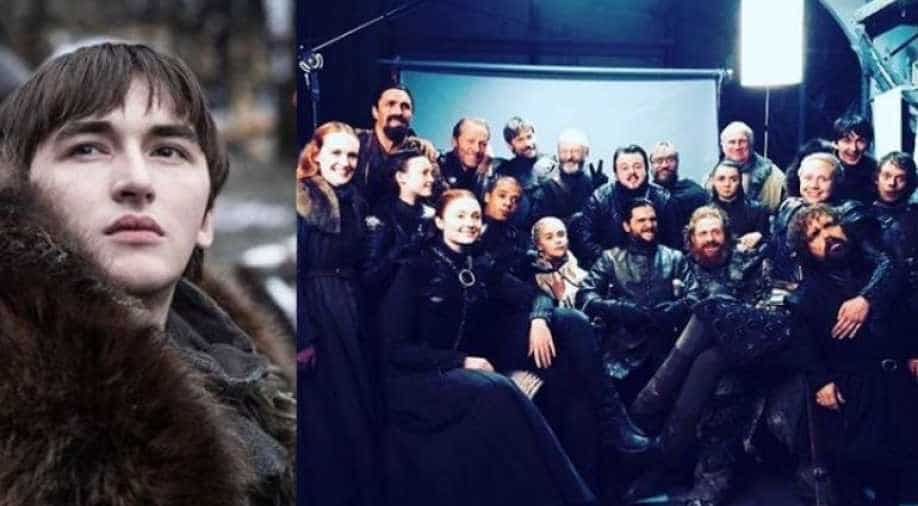 Isaac Wright in a still from 'Game Of Thrones' and a behind-the-scene group photo of the entire cast of the show. (Instagram/HBO) Photograph:(Others)
Follow Us

After a remarkable 8-year-long journey, the makers of 'GoT' failed to impress fans with the final season.

Actor Isaac Hempstead Wright, who played the role of Bran Stark in the insanely popular HBO show `Game of Thrones`, is clearing up another mystery related to the series` ending.

The final episode of the show featured many surprising moments but one of the biggest was- who gets to sit on the iron throne and rules over Westeros?

After a number of twists, Wright`s character was crowned as the king of the six kingdoms (excluding Winterfell) and dubbed Bran the Broken.

Fans and critics alike weren`t very happy with Bran`s ascent into power but according to Wright, the choice was made by none other than author George R.R. Martin, the creator of the books on which the show is based.

"Show creators David Benioff and Dan Weiss told me there were two things George R.R. Martin had planned for Bran, and that was the Hodor revelation, and that he would be king," Wright said in an interview in HBO`s `Making of Game of Thrones`, as cited by Fox News.

"So that`s pretty special to be directly involved in something that is part of George`s vision. It was a really nice way to wrap it up," the actor added.

Martin still has two more books - `The Winds of Winter` and `A Dream of Spring`, he is currently in the process of writing.

He has also implied that the TV show and the books will probably end differently.

"I expect these last two books of mine will fill 3000 manuscript pages between them before I`m done... and if more pages and chapters and scenes are needed, I`ll add them," he continued.

Commenting on the criticism of the last few episodes, Martin said, "How about this? I`ll write it. You read it. Then everyone can make up their own mind, and argue about it on the internet."

Previously, Wright told Entertainment Weekly about reading the finale script: "When I got to the [Dragonpit scene] in the last episode and they`re like, `What about Bran?` I had to get up and pace around the room. I genuinely thought it was a joke script and that David and Dan sent to everyone a script with their own character ends up on the Iron Throne. `Yeah, good one guys. Oh so-, it`s actually real?`"

Wright also added: "I think he`ll be a really good king actually. Perhaps there will be something missing in having real emotive leader, which is a useful quality in a king or queen as well. At the same time, you can`t really argue with Bran. He`s like, `No, I know everything.`"

After a remarkable 8-year-long journey, the makers of `GoT` failed to impress fans with the final season. A couple of days back, disappointed `GoT` fans started a petition on change.org, asking the makers to remake the eighth season of the series "with competent writers".

Sophie Turner, who played Sansa Stark in the show, slammed it as "disrespectful" to all those who work on the show.