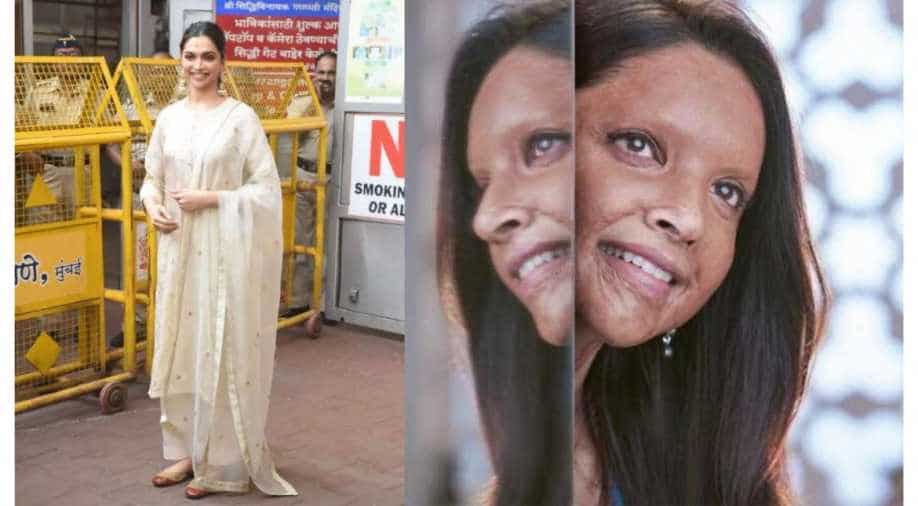 Deepika Padukone and her look from 'Chhapaak' Photograph:( Twitter )

Deepika's 'Chhapaak' is directed by Meghna Gulzar, the same filmmaker who also gave us 'Raazi'. The film also stars Vikrant Massey in a lead role.

As Deepika Padukone's 'Chhapaak' released in the theatres on January 9 today, the actress was seen visiting Siddhivinayak temple in Mumbai.

Dressed in a simple yet elegant salwar suit, Deepika looked visibly happy and vibrant as stopped for pictures and greeted the photographers waiting for her.

Playing an acid attack survivor in her film 'Chhapaak', Deepika visited the temple to seek blessings for her film that was recently mired in a controversy with people calling for a boycott of the film after she came to stand in support of JNU students in New Delhi. She was in the capital city for the promotions of her film when she made a quick stop at the Jawaharlal Nehru University -- a campus that has been revolting against fee hike. The students were recently thrashed by masked goons while the Delhi police took no action against the perpetrators. Deepika's move to go to the JNU was thus highly criticised while one section of the society also applauded her for the stand.