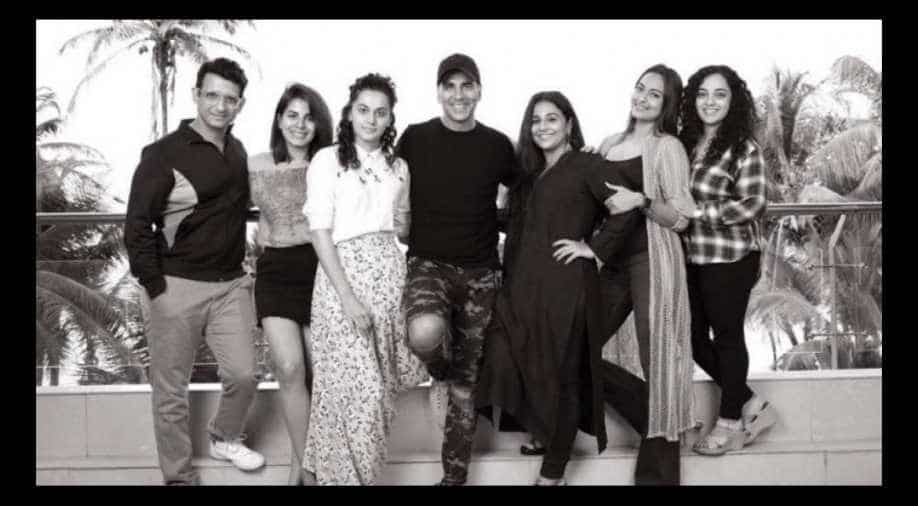 Speaking to WION about working in India’s first space film and completing it in record time, the stars opened up on what to expect.

With less than a day left for the release of their film ‘Mission Mangal’ that will be out in the theatres on August 15, Bollywood stars led by Akshay Kumar came to New Delhi to promote their film that is based on the true events of Indian Space Research Organisation (ISRO) launching Mars Orbiter Mission (MOM) in 2013.

The film’s star cast including Akshay Kumar, Sonakshi Sinha, Taapsee Pannu, Nithya Menen and Kirti Kulhari barring Vidya Balan and Sharman Joshi came for a media interaction in the capital. Read what director Jagan Shakti has to say about his debut film.

Speaking to WION about working in India’s first space film and completing it in record time, the stars opened up about what to expect.

Akshay Kumar who leads the film as the only actor among five actresses, as well as the producer, revealed that they completed the film that looks large on the big canvas in just 32 days. He said, “We made it in 32 days. The entire film is based on facts that most of us would not know about. I especially got to know about all the details of the mission for the first time while filming. I learned of them through our director Jagan Shakti’s sister who is a part of ISRO.”

He added, “It’s only recently that the profession of scientists has come to the forefront as people, in general, did not have much knowledge about their work.”

Akshay also said that in continuation with all his social films that have an inherent message in them, ‘Mission Mangal’ too delivers on that front as it is a film that highlights “nothing is impossible” and added, “If the scientists plan to do something, they will have it done.”

Talking about his tryst with films that have a message for the society at large, Akshay also spoke about his National Award win for ‘PadMan’ that dealt with the relevant issue of awareness around menstruation. When asked if this award motivates him to make more such films, he said, “Even if it wouldn't have (won), I would have still had the motivation to do it. I will keep on doing it, whatever I think is right, whatever my production house thinks is right.”

Is there any fear of being typecast? Akshay responded, “Even if it does typecast me, to do something good, I’m not scared of that.”

Taapsee who will be seen in the film along with other four powerhouse performers also spoke about her experience. She said matter-of-factly that now is the time to watch an India-based space story. “It’s India’s first space science film. For that sake, you should go and watch it. For that sake I am a part of this film,” she said.

Sonakshi agreed and said, “It’s a very big achievement for India. It's a must for every Indian to go and have a look.” detailing about her experience on Mission Mangal’s set, Sonakshi said, “It did not feel like work, I learnt a lot and had a lot of fun in the process.”

Kirti Kulhari who was last seen in ‘Uri: The Surgical Strike’ said, “Although I am from Bollywood and not from the south like Nithya but I was also in the same boat, I didn't know what to expect. I have worked with Taapsee before but everyone else was new for me.”

“I have had the most fun on the set. It was the most tantrum-free set. You have the biggest names of Bollywood in this film together but it was the most warm and friendly set that I have ever been on,” Kirti added.