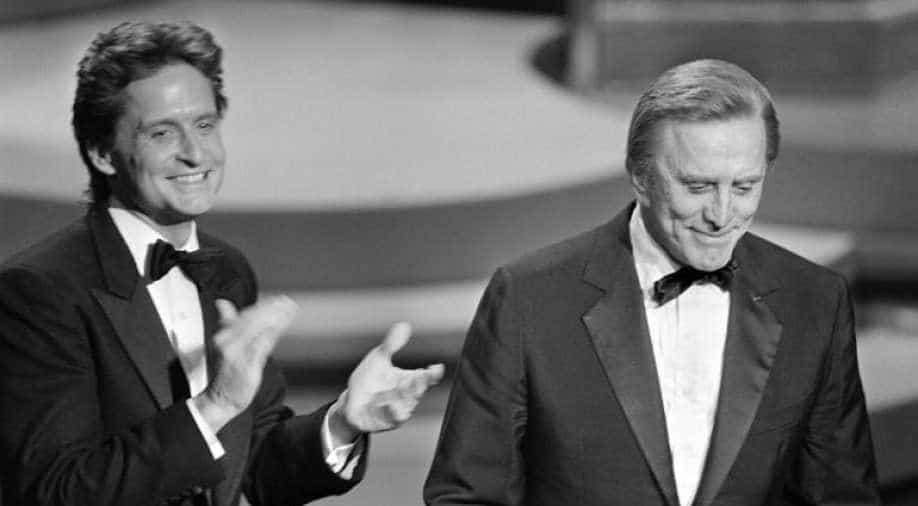 (FILES) In this file photo taken on March 25, 1985 US actor Michael Douglas (L) applauds his father US actor Kirk Douglas during the 57th Annual Academy Awards, in Hollywood, California. US silver screen legend Kirk Douglas, the son of Jewish Russian immigrants who rose through the ranks to become one of Hollywood's biggest-ever stars, has died at 103, his family said on February 5, 2020. Photograph:( AFP )

His death at his family home in Beverly Hills was confirmed by his son Michael, the Oscar-winning actor and filmmaker.

Kirk Douglas, one of the last superstars of Hollywood's golden age of cinema renowned for his intense, muscular performances in "Spartacus" and "Paths of Glory," died Wednesday aged 103.

The US leading man, producer and director came to prominence in the late 1940s and never lost his popularity, taking on nearly 100 movies over a six-decade career that endured beyond a severe stroke in his later years.

His death at his family home in Beverly Hills was confirmed by his son Michael, the Oscar-winning actor and filmmaker.

"It is with tremendous sadness that my brothers and I announce that Kirk Douglas left us today at the age of 103," Michael Douglas said in a statement posted to Facebook.

"To the world, he was a legend, an actor from the golden age of movies who lived well into his golden years, a humanitarian whose commitment to justice and the causes he believed in setting a standard for all of us to aspire to."

Tributes poured in from across Hollywood and around the world on social media, with many declaring "I am Spartacus!" in a nod to Douglas's legendary role as a rebellious Roman slave.

Kirk Douglas was one of the biggest stars of all time & a brilliant actor with an unforgettable, blazing charisma. He will also be remembered for putting his career on the line by defying the Hollywood Blacklist, hiring writer Dalton Trumbo for the classic Spartacus. #RIP 💔 pic.twitter.com/snzoHPMtDr

I once had the honor and privilege of having dinner with him and his wife. Great man, great woman. I recommend his extraordinary autobiography “A Ragman’s Son.”#KirkDouglas pic.twitter.com/Xq5G5L8xxe

In memory of #KirkDouglas, star of many Paramount films spanning the decades, including his first Academy Award nomination for Champion (1949), and his roles in The Strange Love of Martha Ivers (1946), Gunfight at the O.K. Corral (1957) and Last Train From Gun Hill (1959). pic.twitter.com/33TgT5wePt

"Kirk Douglas. The inspirational Scalawag" wrote actor Danny DeVito, in reference to the 1973 movie of the same name -- the first film Douglas directed.

"103 years on this earth. That's got a nice ring to it! Great hanging with you man," he added.

"Heartbroken. Kirk Douglas was a friend and an absolute legend of a star and human. He got better with every passing day," wrote "Seinfeld" star Jason Alexander, adding: "We could use a true Spartacus."

The Academy which awards the Oscars tweeted: "Goodbye to a Hollywood legend."

“I wanted to be an actor ever since I was a kid in the second grade. I did a play, and my mother made a black apron, and I played a shoemaker. After the performance, [my father] gave me my first Oscar: an ice cream cone.” -Kirk Douglas

Goodbye to a Hollywood legend. pic.twitter.com/vnu1Hkb2FA

Douglas, born Issur Danielovitch to Jewish-Russian immigrants in upstate New York in 1916, began as a stage actor before serving in the US Navy during the Second World War.

He graduated to movies in 1946 when "Casablanca" producer Hal Wallis signed him, and he became a star for his role as a double-crossing and womanizing boxer in 1949's "Champion."

His subsequent roles would often mirror his real-world, larger-than-life and intense persona, including a ruthless movie producer in "The Bad and the Beautiful" (1952) and tortured artist Vincent van Gogh in "Lust for Life" (1956).

Douglas told The New York Times in a 1984 interview that he had "always been attracted to characters who are part scoundrel," adding: "I don't find virtue photogenic."

He was renowned for his physical commitment to roles, training for months to play a boxer in "Champion," and learning to horseride and shoot in the 1957 Western "Gunfight at the O.K. Corral".

Douglas gathered three Oscar nominations, the last for "Lust for Life," but missed out each time and was never nominated again. He never won a competitive Academy Award.

But he was granted an honorary lifetime achievement statuette by the Academy in 1996 -- just months after his stroke -- "for 50 years as a creative and moral force in the motion picture community."

"(To) me and my brothers Joel and Peter he was simply Dad, to Catherine (Zeta-Jones), a wonderful father-in-law, to his grandchildren and great grandchild their loving grandfather, and to his wife Anne, a wonderful husband," said Michael.

"Kirk's life was well lived, and he leaves a legacy in film that will endure for generations to come, and a history as a renowned philanthropist who worked to aid the public and bring peace to the planet."