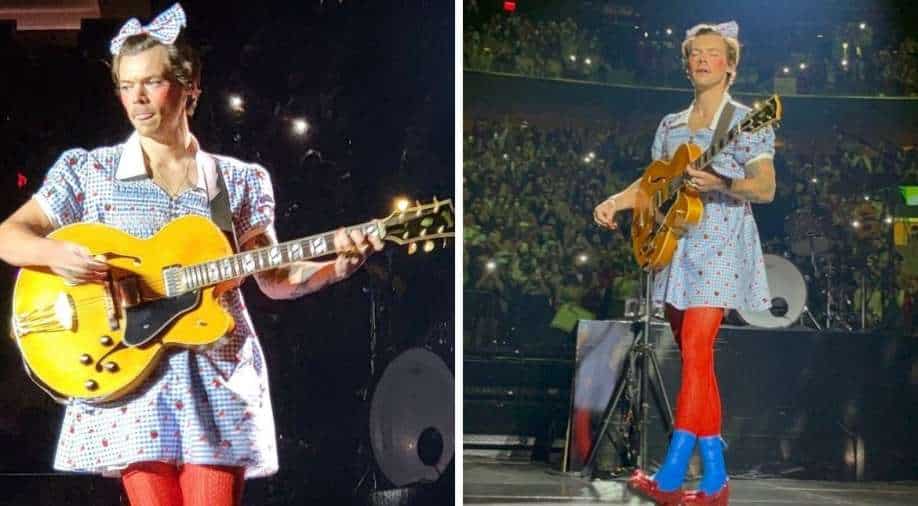 Harry Styles and his band were dressed as characters from the 1939 classic film 'The Wizard Of OZ' and Styles chose to dress up as Judy Garland's characters.

Trust Harry Styles to stand out at his own Halloween gig. Over the weekend, Styles took part in the first of his two Halloween themed shows at New York City's Madison Square Garden and dressed up as Dorothy Gale. Yes, you read that right.

Styles and his band were dressed as characters from the 1939 classic film 'The Wizard Of OZ' and Styles chose to dress up as Judy Garland's characters.

The 27-year-old singer wore a blue and white dress similar to what Garland's character Dorothy wore in the popular film. Styles completed his look with rosy red cheeks, bright red tights and matching bow in his hair and red slippers.
While Styles performed, a picnic basket and a fake dog meant to look just like Dorothy's Toto from the movie also sat beside the former 'One Direction' member onstage.

Dressed liked Dorothy, Styles naturally paid tribute to the classic film and even sang his own rendition of 'Somewhere Over the Rainbow', alongside staple performances of songs already featured on his setlist, including 'Watermelon Sugar' and 'Golden.'

“this year, I decided to dress up for halloween [...] and I feel fabulous” - harry styles on his dorothy costume :’) pic.twitter.com/fhPN7xfoxi

The next day, Styles sang his version of Britney Spears' 'Toxic'- this time dressed as a clown.

Harry Styles kicked off his delayed 'Love on Tour' concert series in September after he released his second solo album, 'Fine Line', in December 2019, just a few months before COVID-19 hit the world.

The last weekend may have been Halloween but Styles has been dressing up in eccentric and colourful outfits in each of his concerts. This is not a surprise as the singer is known for his love for fashion and experimenting with looks.

In December 2020, he became the first man to land a solo cover on Vogue. He dressed in a lace-trimmed dress and tuxedo jacket for the cover.

"Clothes are there to have fun with and experiment with and play with. What's really exciting is that all of these lines are just kind of crumbling away," he told the outlet. "When you take away 'There's clothes for men and there are clothes for women,' once you remove any barriers, obviously you open up the arena in which you can play."

"I'll go in shops sometimes, and I just find myself looking at the women's clothes thinking they're amazing. It's like anything—anytime you're putting barriers up in your own life, you're just limiting yourself," Styles added. "There's so much joy to be had in playing with clothes. I've never really thought too much about what it means—it just becomes this extended part of creating something."