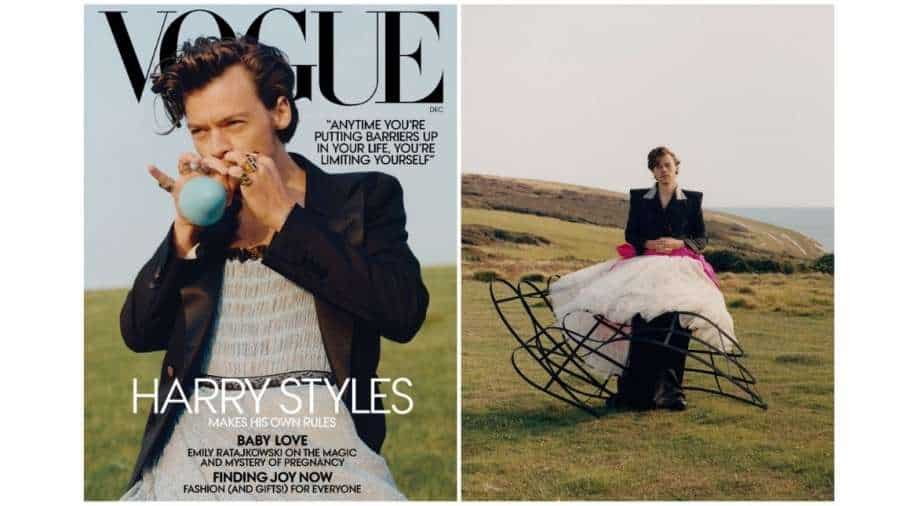 From voluminous gowns to dresses, Harry Styles is making noise for his sartorial choices and the expression he stands for in the feature.

British pop singer Harry Styles recently became the first-ever male cover star as he was featured on the front page of US Vogue magazine. While the pictures became viral at first for the bold avatar of the singer that no one had seen before, soon after it was in news for all reasons that might surprise you.

On the cover feature, Harry Styles opted for a non-binary expression in way of his clothes and gestures. From voluminous gowns to dresses, Harry Styles is making noise for his sartorial choices and the expression he stands for in the feature.

"As a kid, I definitely liked fancy dress," Harry said while talking of the feature and added "I was really young, and I wore tights for [the play]. I remember it was crazy to me that I was wearing a pair of tights. And that was maybe where it all kicked off!"

Styles' sister, Gemma Styles revealed that dressing up was a large part of their childhood, much to her brother's satisfaction and her annoyance. "My mum loved to dress us up. I always hated it, and Harry was always quite into it," she recalls. "She did some really elaborate papier-mâché outfits: She made a giant mug and then painted an atlas on it, and that was Harry being 'The World Cup.'"

The cover has now sparked conversations around masculinity and gendered dressing. From Candice Owens to Ben Shapiro, people have disapproved of Harry Styles’ dressing for the magazine. Owens even wrote, “Bring back manly men.”

“There is no society that can survive without strong men,” Owens, a rightwing media powerhouse, said. “The East knows this. In the west, the steady feminization of our men at the same time that Marxism is being taught to our children is not a coincidence. It is an outright attack.”

Ben Shapiro, a conservative pundit, appeared to agree with Owens’ attacks. He shared her tweet and added: “Anyone who pretends this is not a referendum on masculinity for men to don floofy dresses is treating you like a full-on idiot.”

This is not the first time Styles has played around with fashion in bold ways. The singer wore a black dress by the Japanese brand Commes Des Garçons on the cover of the Guardian Weekend and defended the queer aesthetics of his visual work. “I’m not just sprinkling in sexual ambiguity to be interesting,” he said. “I want things to look a certain way. Not because it makes me look gay, or it makes me look straight, or it makes me look bisexual, but because I think it looks cool.”

Celebs have now come to fore to support Harry Styles with Olivia Wilde who is currently directing a Styles-led film, replied to Owens’ tweets with: “You’re pathetic.” Jameela Jamil tweeted out in Styles’ defense: “Manly is whatever you want it to be.”