Alfie Allen expressed shock over the sudden death of his 'Game of Thrones' double Andrew Dunbar. Dunbar died suddenly at his home in Belfast on Christmas Eve.

Alfie Allen expressed shock over the sudden death of his 'Game of Thrones' double Andrew Dunbar. Dunbar died suddenly at his home in Belfast on Christmas Eve. According to media reports, his death is not being treated as suspicious.

He had starred as the body double for Theon Greyjoy (essayed by Allen) in the hit HBO drama, and also had roles in shows such as 'Derry Girls' and 'Line of Duty'.

"Andrew was an actor who was also a stand-in as Theon on GoT. Extremely shocked and saddened to hear of his passing. To lose a loved one so young, I can only imagine what his family are going through. RIP Andrew," Allen wrote on Instagram. 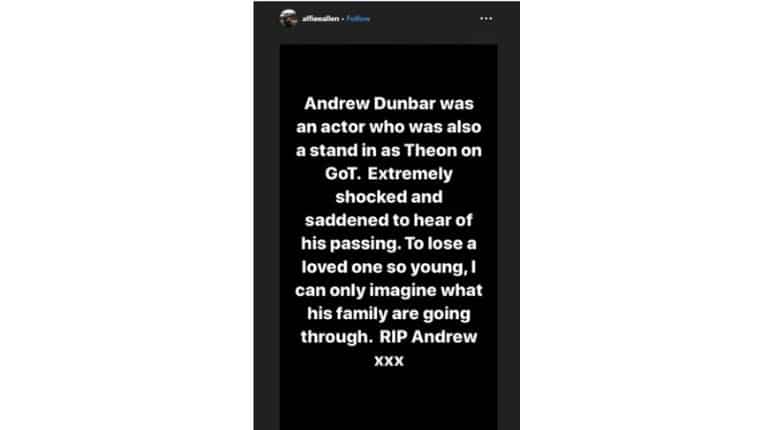 Fellow co-star Andy McClay said, "Everyone always wanted Andrew. There was just something about him that was special. People always felt good around him, happy, excited for the day`s work and there was always a lot of fun when he was around."

"A lot of people plan to travel to attend his funeral; actors, directors, make-up and many, many more. Everyone who met Andrew loved him," he added.