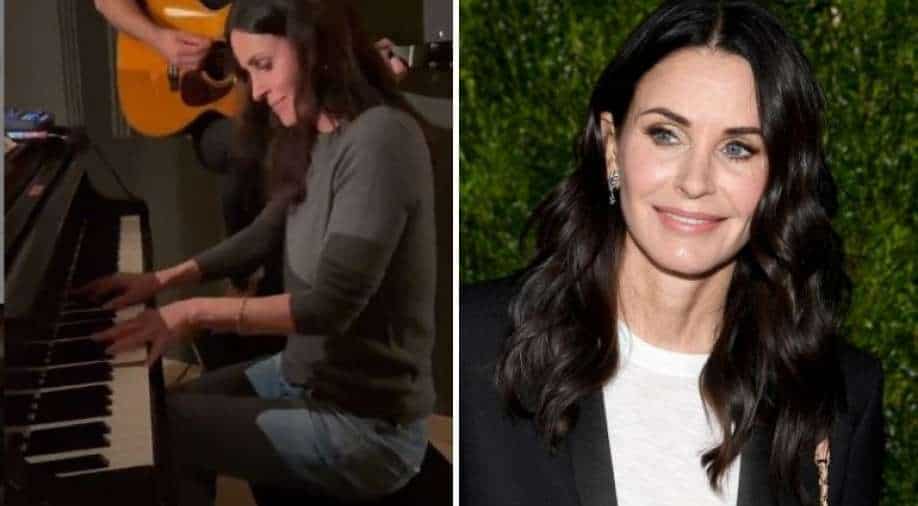 Courtney Cox took to Instagram to play the theme song of 'Friends'- 'I'll Be There For You' on the piano for fans. The original song was performed by The Rembrandts.

Phoebe would have been proud. Courtney Cox, who played cleanliness freak Monica Gellar in 'Friends', recently showcased her piano prowess on social media.

The actress took to Instagram to play the theme song of 'Friends'- 'I'll Be There For You' on the piano for fans. The original song was performed by The Rembrandts.

The much-loved sitcom spurred many scenes, lines, and settings that have withstood the test of time. And ahead of the upcoming `Friends` reunion special on HBO Max, Cox took to Instagram to put her own spin on the classic tune, playing the song on a piano alongside musician Joel Taylor on the guitar.

The clip starts with Cox performing four claps, which is arguably the best-known part of the tune, before diving into some fast-paced chords while Taylor strummed along. The video ends when dialogue audio from the show plays, surprising the `Scream` actor.

"Oh, that was Chandler," she said, referencing Matthew Perry`s character Chandler Bing, after realising what the sound was. "How`d I do?" she asked in the caption.

According to the celebrity reactions in the comments, Cox did pretty well. "OMG OMG," wrote David Beckham, adding flame emojis, as well as smiling faces with hearts for eyes.

Earlier, in celebration of Thanksgiving, Cox also recreated a famous `Friends` moment when she put her entire head into a raw turkey.

She later shared a behind-the-scenes video showcasing how she managed to encase her noggin in poultry.

The American sitcom was touted as one of the most popular ones and is still the talk of the town among fans, who are eagerly waiting to see their favourite stars back together. Apart from Cox and Perry, the show also featured Jennifer Aniston, Lisa Kudrow, Matt LeBlanc, and David Schwimmer. The beloved sitcom ran for 10 seasons on NBC between 1994-2004. It followed the story of six friends in their 20s and 30s who live in Manhattan, New York City.

The six actors along with the creators of the show will be taping the reunion episode soon. The episode was soriginally scheduled to air on HBO Max in early 2020 but had to be postponed due to the pandemic.