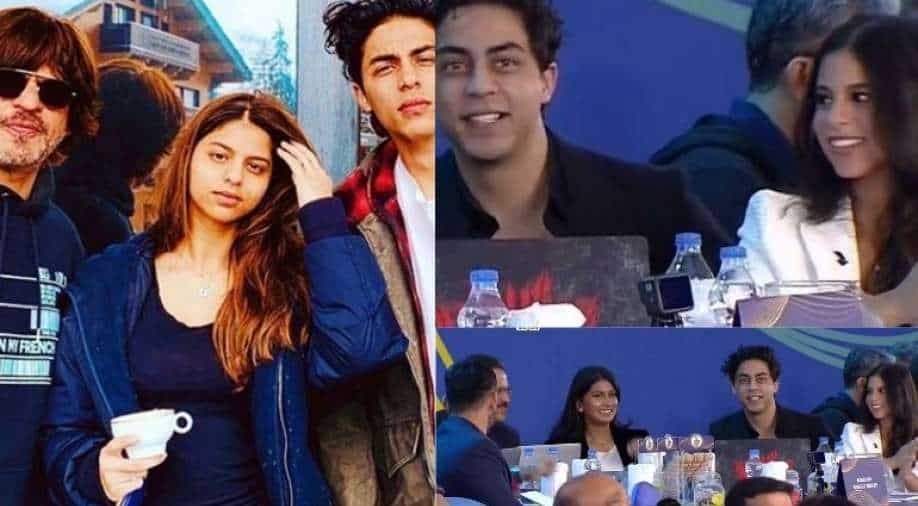 This marked Aryan's first public appearance since his arrest in the drugs case last year.

The much-awaited IPL season is back and the mega auction of the Indian Premier League 2022 is underway in Bengaluru, India, just like the briefing event that took place on Friday, it seems like Shah Rukh Khan, KKR co-owner skipped the main event also and to fill his place, his son Aryan and daughter attended the auction.

The siblings were spotted sitting at the IPL 2022 auction, representing Kolkata Knight Riders. As soon as the star kids were clicked, their pictures went viral on social media. In the viral pictures, Aryan & Suhana were seen having a conversation amidst the auction. This time, both opted for formal attire.

Aren’t they adorable?! So happy seeing them like this 😍! Treat for the eyes and heart. 💜 #aryaankhan #suhanakhan @iamsrk pic.twitter.com/wJ1izws3RN

Before the auction, the official Instagram handle of the team shared a photo featuring Suhana, Aryan and Juhi Chawla's daughter Jahnvi Mehta and all were seen discussing the strategy with KKR CEO Venky Mysore. Sharing the post, they wrote, ''A crash course in #IPLAuction strategies from the CEO to our Gen Next⏭ @VenkyMysore @suhanakhan2 @___aryan___ @jahnavi_mehta #AryanKhan #SuhanaKhan #JahnaviMehta #GalaxyOfKnights.''

Suhana also shared the same post on her Instagram story and captioned it with a purple heart.

They were earlier spotted at the pre-IPL Auction briefing too. Earlier, the pictures were shared by the Indian Premier League's Twitter account and showed Aryan and Suhana with the Kolkata Knight Riders team.

In the auction briefing, the brother-sister duo was seated on the last row with other members of KKR and was clad in casual attires with their masks on. The team's co-owner, Juhi Chawla was also represented by her daughter Jahnavi.

This marked Aryan's first public appearance since his arrest in the drugs case last year and his fans cheered for him on the tweets.

''My Name Is Khan & I am The Future King 👑 Of Bollywood,'' one user commented. Another wrote, ''Srk is always king of Bollywood and will always be.''

MY Name Is Khan & I am The Future King 👑 Of Bollywood 🙌💥#AryanKhan #ShahRukhKhan pic.twitter.com/E7BjR0mbnI