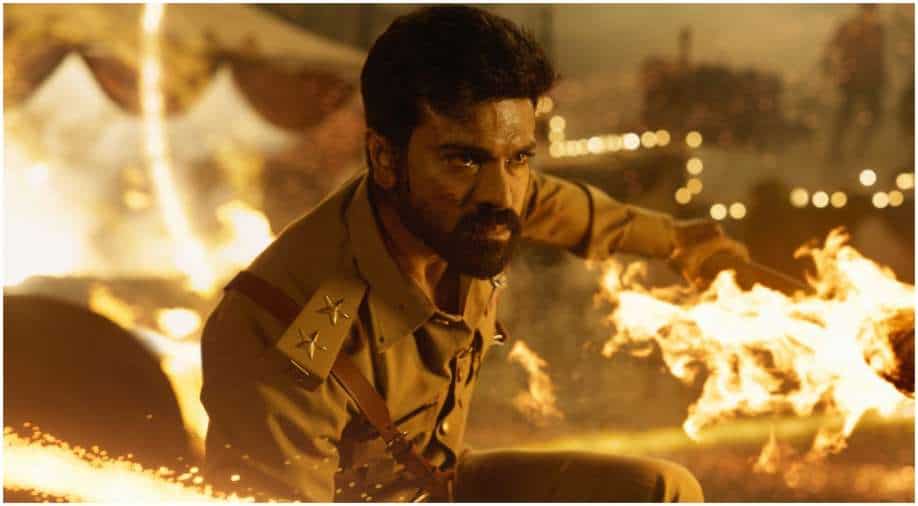 Ram Charan in a still from the movie Photograph:( Instagram )

Not just his fitness level, Ram Charan seems to have worked on his mannerisms, too, as he has also effortlessly nailed the body language of a police officer from the British era in 'RRR'.

South Indian superstar, Ram Charan, has won his fans over (yet again) with his daring act in SS Rajamouli's upcoming drama 'RRR'. The trailer of the movie was released on Thursday (December 9) in four major Indian languages: Tamil, Telugu, Malayalam, Kannada and Hindi.

If there is one common fever among people across the country, then it is undoubtedly the RRR fever. The most anticipated film of recent times is setting unimaginable standards with each passing announcements, posters, teasers and trailer. Well, it is not called magnum opus for nothing.

'RRR' trailer is out today and one cannot contain their excitement to watch Mega Power Star Ram Charan on a 70mm screen as Alluri Sita Rama Raju and feel every tingling moment of goosebumps. The most noticeable facet among several mind boggling aspects of Ram Charan in this film is his body and emoting prowess. Chiseled to perfection, Ram Charan has trained with utmost determination and diligence to suit the role of Alluri Sitarama Raju, a freedom fighter who every Indian remembers and celebrates.

Not just his fitness level, Ram Charan seems to have worked on his mannerisms, too, as he has also effortlessly nailed the body language of a police officer from the British era. His form in the boxing scene has received tremendous response by netizens who are ardent fans of the activity.

'RRR', which is all set to release on January 7, is going to unravel several facets and talents of Ram Charan. Alluri SItarama Raju will now remain in all our hearts as Ram Charan.

Check out some of the tweets that fans have shared about the star's performance since the trailer dropped:

In India only three actors are capable of justifying lord Rama on screen and they are #HrithikRoshan , #RamCharan and #RanveerSingh ! Their face cut , physique and voice are 💥💥💥 #RRRMovie #RRRMovieCelebrations