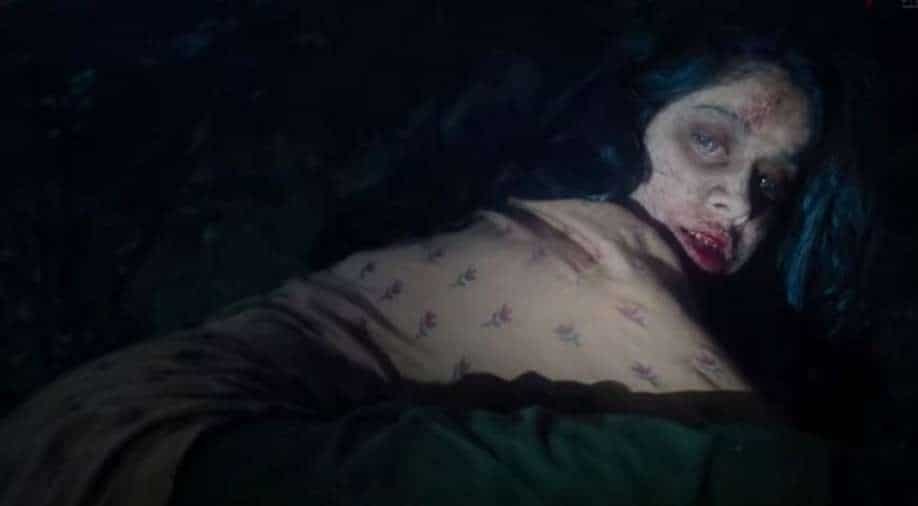 Janhvi Kapoor in a still from 'Roohi'. Image via Youtube screengrab/Maddock Films Photograph:( Others )

In 'Roohi', Janhvi Kapoor plays the vulnerable, sad Roohi to the hilt while Varun Sharma aces as Kattani. The scenes where Kattani romances Afza, the ghost possessing Roohi are high points of the film.

Filmmaker Hardik Mehta is credited for co-writing one of the most successful web series of last year- 'Pataal Lok' and also for directing the thought-provoking feature film 'Kamyaab'. Mehta returns to screen in 2021 with horror-comedy 'Roohi' featuring the versatile Rajkummar Rao, the effortlessly funny Varun Sharma and the talented Janhvi Kapoor (in the title role). Mehta serves as the director of the film which has been written by Mrigdeep Lamba and Gautam Mehra.

Set in a fictitious small town Bagadpur, the film has Rao and Sharma playing reporters of a local newspaper who earn mostly through kidnapping potential brides. Their boss (Manav Vij) runs a newspaper as well as an agency which deals with forced marriages. The system is of course not legal, but as Sharma says, that's how it works in the town.

One such assignment entails Bhawra and Kattani to kidnap young girl Roohi (Janhvi Kapoor). The duo takes her to an abandoned property outside the town and keeps her locked there waiting for further instructions from their boss. She is terrified of the two for obvious reason as they lock her up in a dark dilapidated room. But tables turn when Bhawra watches her climb up the wall and realise she is possessed and that things are not quite right.

While Bhawra is scared out of his wits, Kattani finds deep interest in Roohi's evil alter ego, supposedly a chudail called Afza as he thinks he has found his soul mate in her. Afza is in search of a suitable groom, and has been haunting the town, possesing suitable brides to get married to their grooms.

As the two men squabble about which version of the girl they would like to get rid of, a helpless, demure Roohi finds herself being dragged along to Chimmatipur, a town that specialises in excorcism but doesn't have any solution for mudhiya pairi, or witches with inverted feet.

The plot is absurd and convoluted with an inconsistent screenplay that doesn't help the film completely land on its feet. The first half- as writers attempt to establish the plot- is enjoyable, largely because of Sharma's comic timing and anticipation of discovering Roohi's evil alter ego.

Once the plot is established, the story waivers and loses the focus ultimately landing on a completely different climax which leaves one confused and wondering whether such a take was needed or not.

Kapoor plays the vulnerable, sad Roohi to the hilt while Sharma aces as Kattani. The scenes where Kattani romances Afza, the ghost possessing Roohi are high points of the film. The screenplay cleverly debunks a few myths around witches and the terror around them by juxtaposing it with comedy. It makes viewing more interesting and the subtle messaging more effective.

Rao, who has played the small-town affable boy in several films by now, tries hard to be consistent, but an incoherent screenplay lets him down-much like the other two actors. It also doesn't help that the two leading actors are made to speak in an inconsistent dialect which not only painstaking to comprehend but also appears jarring after a point of time. I wish they had all spoken normal Hindi- would have elevated the viewing experience to a great level.

A sequel of 'Stree' or rather the second film in the horror-comedy franchise from Maddock Films, the film lacks the spark of the 'Stree'. Sure it has Varun Sharma acing in his role, and Rao flexing his comic timing to great extent, but the witty lines of 'Stree' packed a greater punch that 'Roohi'.

'Stree' though did not try to debunk any myths which 'Roohi' does. The second half, even though slow and meandering, ultimately talks of the business around social evils that small-towns in India still thrive upon. It also briefly touches upon mental health and gives a feminist take to the age-old myths around witches.

The film's jumbled screenplay ultimately lets down the film. It does bring in the laughs and the thrills initially but it soon wears off.

'Roohi' is the first big release post-pandemic India. It comes at a time when the country is slowly opening up to the new normal with theatres being allowed 100 per cent occupancy. But will the thrills and shrills of 'Roohi' pull in the crowd is something that remains to be seen.