Friendship Day 2022 Special: 10 nostalgic movies to watch with your friends 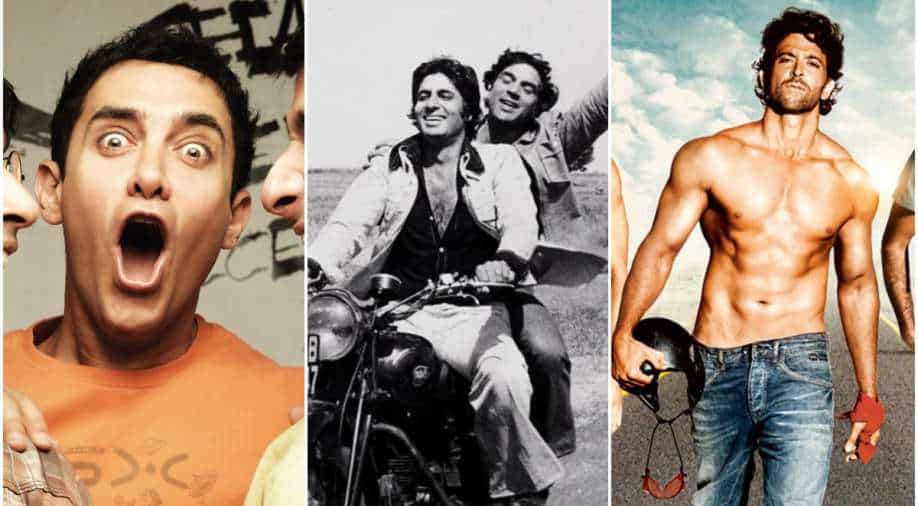 Friendship Day 2022 Special: Which one of these is your favourite? Photograph:( Others )

Friendship Day 2022: Friendship has been a popular topic in Bollywood, with countless films devoted to this particular relationship. Celebrate this day by watching these movies handpicked by us for you.

As Friendship Day comes, we all need some beautiful, insightful, and life-changing friendship films to compensate for the reality that our close friends are still hundreds of miles apart. Maintaining friendships takes time and effort as you get older, but you also realise how important it is to keep in touch with the important people in your life. Current research indicates that having close friends reduces stress, keeps you alert, and helps you live longer.

As the world celebrates International Friendship Day, here are a few of the best Bollywood films to watch with your friends  for a weekend filled with memories and nostalgic conversations:

As part of Abhay Deol's bachelor party before his wedding to Kalki, a group of three pals (Hrithik, Abhay Deol, and Farhan Akhtar) embarks on a road trip across Spain. Both Hritik and Farhan are coping with personal problems. The wafer-thin premise is brilliantly placed on film thanks to a terrific writer. The performances are nothing short of outstanding. The film also stars Deepti Naval and Naseeruddin Shah.

Marriage and love are among the major subjects addressed in the film. Nonetheless, the amazing comedy keeps you entertained at all times.  We think that's an indication of fantastic writing. On this day of friendship, the La Tomatina festival, Spanish beaches, and Katrina Kaif are all worthy.

Rajkumar Hirani has always tackled a specific topic and/or brazenly satirised many of society's feeble beliefs and ethics. The stereotypical assumption that if you want to be successful as a scientific student, you must major in either medical science or engineering is the subject of this video. Rancho, Raju, and Farhan's trip is both painful and amusing, and we can't get enough of it. Their bond hooks our hearts with its simplicity, reminding us of our college mates and that one quirky friend who always dared to think outside the box.

Chhichhore is an emotional roller coaster that pays respect to college-era friendships, loves, ragging, arguments, contests, and innumerable memories. It's a relevant picture with an essential message given in an interesting story. Chhichhore, directed by Nitesh Tiwari of 'Dangal' fame, is a film with a lot of material and a lot of fun that lingers with you for a long time.

This film will transport you back to your college days. This is the story of four slackers who want to get rich quickly and enjoy their school days. From college girls and prom night to these dudes messing everything up, this video has it all.

'Dil Chahta Hai' is like taking a deep breath of fresh air. It demonstrates how bringing young people into a business is always a positive thing. 'Dil Chahta Hai' is one of the greatest. It's just one of those films that you'll find difficult not to like, mostly because it exemplifies how the medium of Indian cinema should be employed. Rather than just cutting and pasting a song into the film, the directors have done an excellent job of making each song seem wanted, visually intriguing, and never dragging.

What are your thoughts on this film? It lends color to our otherwise grayscale existence. From the camera work to the music to the colorful writing and performers, this film is a lovely celebration of friendship. It is one of the greatest Bollywood friendship films ever created. This video depicts friendship ideals such as love, trust, forgiveness, and fun.

By departing from the customary format of making an all-female film, Veere Di Wedding caused a stir in the industry. Veere Di Wedding is a 'unsanskaari' departure from conventional female cinema. The film is bundled with the actresses' deep and impenetrable relationship. Veere Di Wedding is light and airy, yet its various strands are so beautifully constructed that they smack of overt fabrication.

Sholay is a legendary Bollywood film from 1975. Many factors contributed to the film's success, beginning with an A-OK cast that included Dharmendra as the playful Veeru, Amitabh Bachchan as the witty Jai, Sanjeev Kumar as the vengeful Thakur Baldev Singh, Hema Malini as the yapper Basanti, Jaya Bhaduri as the quiet widow Radha, and Amjad Khan as the notorious Gabbar Singh.

Overall, the film is excellent and should be seen by everyone. It provides extensive amusement since it is a superb combination of all cinematic aspects. Don't miss this friendship day. Those who do not want to see it...tera kya Hoga Kaalia?!

Luv Ranjan's films have garnered the reputation of having sexist plots, and Sonu Ke Tittu Ki Sweety is no exception, with the only exception being the inclusion of Bromance Versus Romance as the major topic.

Sonu Ke Tittu Ki Sweety is about two best friends, Titu (Sunny Singh) and Sonu (Kartik Aaryan), who are continually rescuing Titu from hooking up with the wrong women. Sweety (Nushrat Bharucha) enters Titu's life, and her love shakes his universe. However, Sonu suspects something is amiss with Sweety and goes to great lengths to save Titu from slipping into the wrong hands again.

Munnabhai M.B.B.S. is a comedy about a gangster who aspires to be a doctor. There are both comic and serious parts in the film. It is an enjoyable film featuring well-known likable characters such as Munnabhai and Circuit.

'Munnabhai M.B.B.S.' is, in effect, its own film, and it is the acting and humor that make it worth seeing because most of the dramatic scenes are a touch over the top. While the dialogue in the humorous sections is smart and entertaining, it is a disaster in the tragic scenes.

These are only a few examples of Bollywood films that honor friendship. Others utilize amazing stories to honor the notion of friendship.

Because there is no perfect definition of friendship, the list will always be incomplete, and the film industry has long admired the concept because it links more and more people, creating a bigger buzz!

So get some popcorn and settle down to watch one of the movies on the list above.