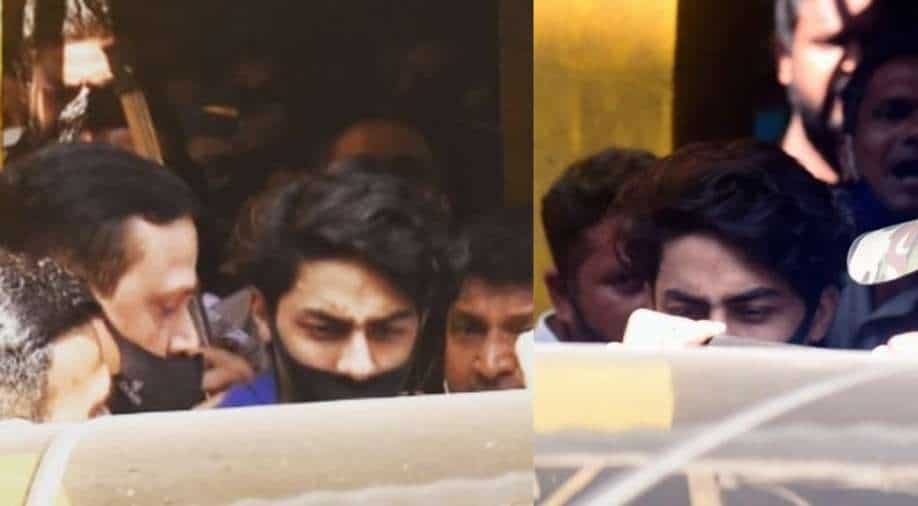 Aryan Khan walks out of Arthur Road prison, father Shah Rukh Khan comes to pick him up (not seen here) Photograph:( Others )

Earlier in the day, Shah Rukh Khan was seen leaving his Mumbai residence 'Mannat' for Arthur Road jail to receive his son Aryan Khan, who has been in custody for over three weeks following his arrest after a drug raid off Mumbai's coastline on October 2.

Bollywood superstar Shah Rukh Khan's son, Aryan Khan, has finally walked out of Arthur Road prison in Mumbai around 11 AM on October 30, three weeks after being taken into custody in a drug case.

The star kid walked out amid tight security, media presence and his father by his side amid a scrum of fans, media and onlookers.

Aryan Khan was granted bail by the Bombay High Court on October 28.

Jail officials had opened the bail box outside Arthur Road Jail at about 5:30 am on Saturday to collect bail orders. Reports said a physical copy of Aryan Khan's bail release order was also part of the lot on Friday.

Also read: Hum Do Humare Do review: Kriti Sanon is charming in this one-time watch film

Earlier, Shah Rukh Khan was spotted leaving his Mumbai residence Mannat for Arthur Road jail to receive Aryan, who has been in custody for over three weeks following his arrest after a drug-bust raid off Mumbai's coastline on October 2.

Since it's a high-profile case, police personnel in huge numbers have been deployed outside jail and barricades have been erected owing to mass gathering and media presence.

The court then accepted her as the surety for Aryan's bail as she signed off crucial papers and executed the bail bond before the court officials.

The bail papers were sent directly to the jail authorities for processing after Chawla had reportedly carried out the formalities. But, according to news reports, the physical copy of Aryan Khan's release order was dropped in the bail box after the stipulated time.

The Bombay High Court granted bail to Aryan Khan with a $1, 335 bond, as per the orders issued on Friday.

On Saturday (October 30), Bollywood superstar Shah Rukh Khan was spotted leaving his residence 'Mannat' in the wee hours of the morning for jail ahead of Aryan’s release. He is expected to be out by 10 AM.

Aryan was arrested by the Narcotics Control Bureau (NCB) on October 2 along with seven others after the NCB busted an alleged rave party in Mumbai.