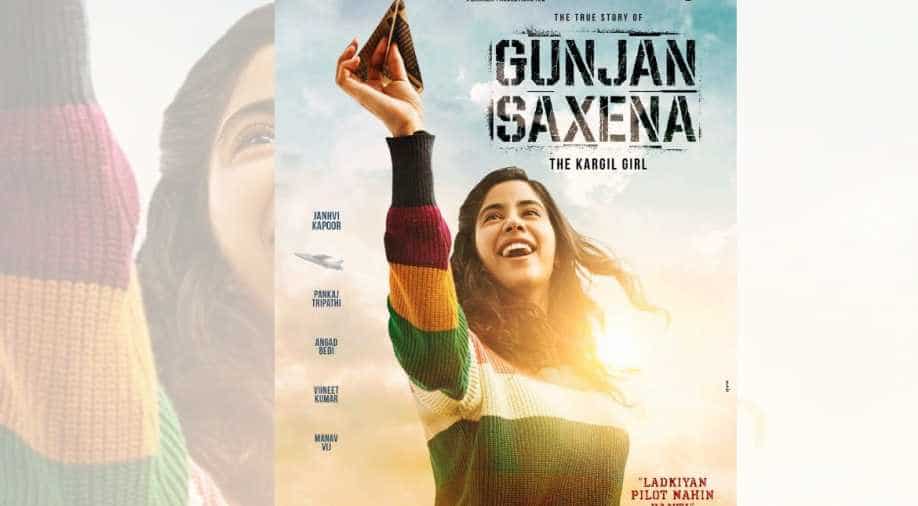 'Gunjan Saxena: The Kargil Girl' is a poignant story of a father and his daughter- both dreamers who refuse to back down.

In one of the most poignant scenes of Sharan Sharma's 'Gunjan Saxena: The Kargil Girl',  a dejected Gunjan (Janhvi Kapoor) tells her father (Pankaj Tripathi) that she is thinking of settling down. Having faced constant sexism at her first posting at an Airforce base in Uddhampur, the young woman feels marriage would be a better deal. Her father who has been her biggest ally and has rooted for her dream to become a pilot looks at her shocked and eventually tells her that how society will always want to cage free-spirited women and it's upto the women to break free. The scene beautifully sums up 'Gunjan Saxena: The Kargil Girl'.

Based on Gunjan Saxena, the first woman combat pilot of the Indian Airforce who played a crucial role at the Kargil war, the film highlights a young girl's dream of becoming a pilot, her initial days at the Indian Air Force and the constant sexism that she had to face for choosing such an uncanny profession.

Born to an Army officer father and homemaker mother, Gunjan harboured dreams of becoming a pilot from a young age. While her father gave her wings to fly, she faced numerous obstacles throughout her life. From a misogynist brother (Angad Singh Bedi) who thought his sister was only good for serving people tea and coffee on the flight to lack of funds to enroll herself in a flight school- problems were in plenty. But Gunjan encouraged greatly by her father, and her determination makes it the Indian Air Force as one of the first few female pilots.

In her first posting, a new set of problems crop up simply because she is the only female officer at that base. From sexist comments to professional rivalries to not getting a women exclusive changing room- Gunjan's problems are far from over. How she overcomes them and eventually becomes one of the heroes during the Kargil War forms the rest of the story.

The beauty of writers Nikhil Mehrotra and Sharan Sharma lie in the way they approach the story of Gunjan Sharma, devoid of any frills. The story is of a girl's struggle to become one of the most celebrated IAF officers and the writers never deviate from the main plot. So there is no unnecessary romantic plot, or for that matter any parallel track. It solely concentrates on telling Gunjan's story.

It also takes a very balanced approach in its depiction of the men. Gujan has been a victim of workplace sexism. She has colleagues who avoid eye contact with her, cancel sortes with her and are even scared that she will become a 'sir' from 'madam'. But then she is guided ably by a senior officer (Manav Vij) who takes her under his wings and trains her to become the best in class. Then at home, while she is constantly discouraged by her brother, it's her father who is always giving her the push to pursue her dreams.

'Gunjan Saxena' is also a story of an ambitious daughter and her encouraging father and Janhvi Kapoor and Pankaj Tripathi make for a formidable pair. Kapoor in the lead role delivers a performance that shows her confidence over her craft. She is restraint as the young Gunjan and confident and ambitious as the older version of the character. However, on many occassion, her expressions do not really match up to the scene. In the garb of showing herself as helpless and frustrated, Kapoor adopts a straight face that does not indicate the emotions the character is going through affectively.

Tripathi, on the other hand, is completely a delight to watch. As the encouraging father, he finds multiple ways to convince his family members about Gunjan's ambitious plans. He is such a gifted actor that he manages to uplift even the smallest of the gestures beautifully.

Angad Singh Bedi and Vineet Kumar Singh, who play characters from the other end of the spectrum are convincing in the roles. They are the ones who are constantly discouraging and proving to be a hindrance in Gunjan's journey to becoming a pilot and the two actors deliver well in their respective roles.

The film is nearly 2 hours long and the director packs in a lot of stuff in that duration. How Gunjan got introduced to the idea of becoming a pilot to her early school days as a student who topped her class, to her training in the IAF- A lot is shown in the film. Despite the detailing, the film never appears too stretched.

Shot by the R Dee, the film captures the valleys, (supposed to be Kargil and Dras sector) well. I wish it had got a theatrical release, the war scenes would have looked grand on the big screen. On OTT, the impact of the battle scenes lessens to an extent. It was made for the big screen anyway but had to opt for a digital release due to the pandemic.

The film ultimately scores because of its content that effectively highlights the misogyny of the IAF in the 1990s. 'Gunjan Saxena: The Kargil Girl' is also a poignant story of a father and his daughter- both dreamers who refuse to back down.

The film is streaming on Netflix from August 12 onwards.