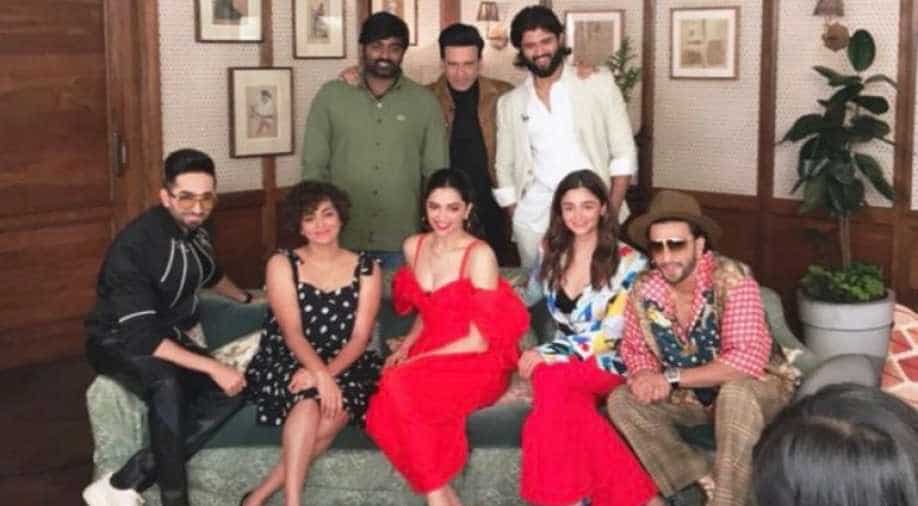 Stars from Hindi and southern film industry came under one roof for a media event recently Photograph:( Twitter )

The superstars came under one roof for a media event and discussed the business of cinema. All the stars are supremely successful in their own right.

This one is made in celluloid dreams. Ayushmann Khurrana, Ranveer Singh, Deepika Padukone, Alia Bhatt and Manoj Bajpayee recently shared a platform with southern stars Vijay Deverakonda, Vijay Sethupathi and Parvathy Thiruvothu that created a lot of buzz on social media.

The superstars came under one roof for a media event and discussed the business of cinema. All the stars are supremely successful in their own right. Ayushmann, who has just delivered his seventh consecutive hit in 'Bala', is right now the actor with maximum hits under his belt. Alia Bhatt may have had just one release this year, but 'Gully Boy' proved to be a critically acclaimed film which was loved by masses as well.

Deepika may not have had any release post 'Padmaavat' in January 2018, but the actress, with her international endorsements and upcoming films like 'Chhapaak' and '83', always manages to stay relevant. Her husband Ranveer Singh, meanwhile, has been delivering blockbusters throughout from 'Bajirao Mastani' to 'Padmaavat' to 'Simmba' to even 'Gully Boy'. Singh is also prepping for '83' a film on India's winning of the cricket world cup.

Manoj Bajpayee, perhaps one of the first few actors to have experimented with roles and film genres, has recently bounced back with a gripping series 'Family Man' which has given Bajpayee's career a fresh lease.

The south stars- representing Tamil, Telugu, and Malayalam film industries- are rewriting history. Tamil actor Vijay Sethupathi is one of the most successful young stars of Tamil films. With hits like Naanum Rowdy Dhaan (2015), Srthupathi (2016), Vikram Vedha (2017) and Junga (2018) under his belt, in 2019 alone, he has seen two major films - 'Petta' and 'Super Deluxe' - hitting the bull’s eye. Telugu superstar Vijay Deverakonda hit the national limelight with the remake of his surprise Telugu hit - 'Arjun Reddy' - into Hindi as 'Kabir Singh'. The young actor, who made his debut with Pelli Choopulu (2016), has delivered quite a few hits such as Dear Comrade (2019) and Taxiwala (2018). Meanwhile, Malayalam star Parvathy Thiruvothu is known for her award-winning film 'Take Off'. She has even featured in popular Hindi film 'Qarib Qarib Singlle' and is known for her strong voice which has often been subjected to criticism.