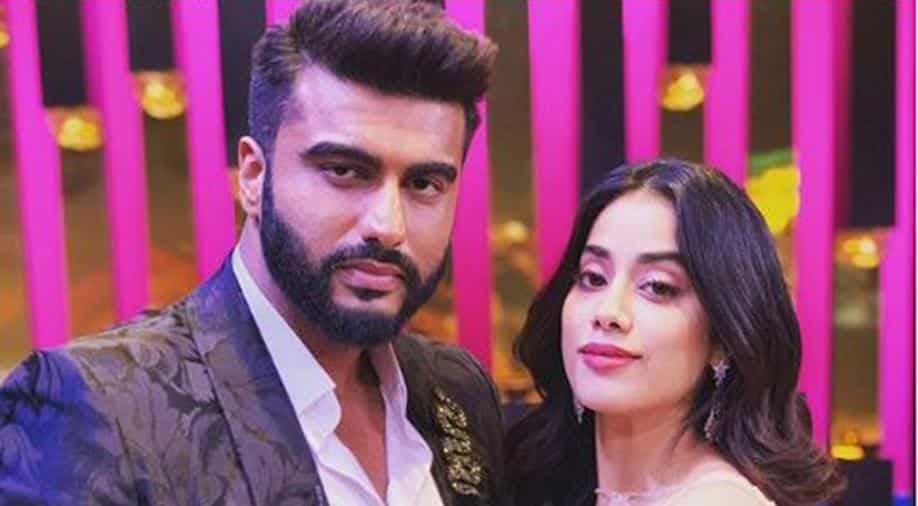 Photo of Arjun Kapoor and Janhvi Kapoor on the sets of 'Koffee with Karan' Photograph:( Zee News Network )

"The Koffee With Karan sibling episode! Was so lovely to chat with this hysterical brother sister duo", said Karan Johar in his Instagram post.

Karan Johar's latest tweet reveals that he had a gala time with the 'Kapoor siblings' during the shoot on the sets of  'Koffee with Karan' as he shot with Arjun Kapoor and his sister Janhvi. The Kapoors will be sharing the couch in one of the episode of the upcoming season.

In his Instagarm post, Karan Johar said, "The Koffee With Karan sibling episode! Was so lovely to chat with this hysterical brother sister duo." He also shared their photo on  Instagram.

The #koffeewithkaran sibling episode! Was so lovely to chat with this hysterical brother sister duo!!! @arjunkapoor @janhvikapoor ☕️☕️☕️❤️

Janhvi and Arjun too shared photos from the sets of the show.

With the Koffee legend @arjunkapoor Thank you @karanjohar for having us!! So much fun 🌈🕺🏼

Just what I needed in the middle of my chaos. A reminder of what matters the most to me now...Family. Notice #JanhviKapoor in shock & awe about the fact that the Koffee King agreed to share the Kouch with her. Thank u @Karanjohar for having us & u know me... I’ll be back 😉!!! pic.twitter.com/bJSYeQOURU

Alia Bhat and Deepika Padukone will feature in the first episode of season 6.  He shared a post which said, ''The first cup of Koffee is all about girl power!! Welcome, Deepika Padukone and Alia Bhatt on episode 1 season 6 of Koffee With Karan."

Saif Ali Khan and his daughter Sara Ali Khan also sipped 'Koffee'' a few days back as they shot for the chat show.