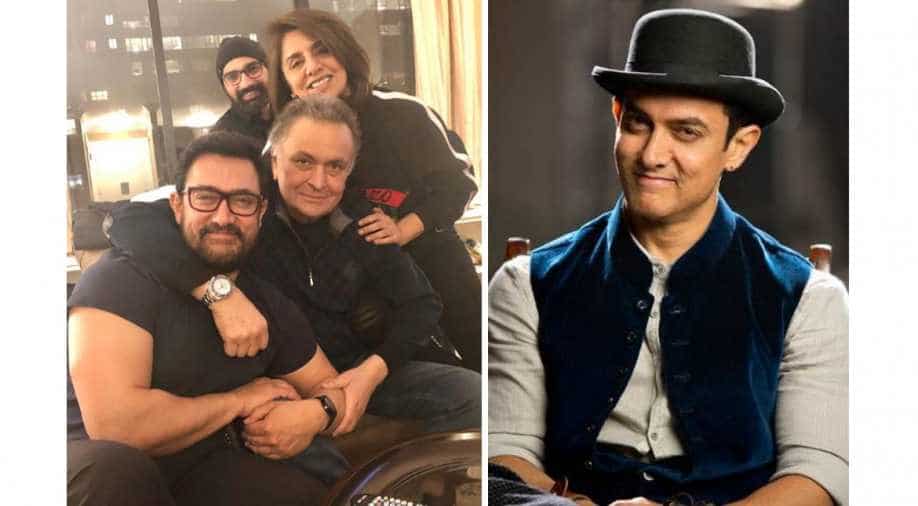 Rishi Kapoor's wife, Neetu Kapoor, a veteran actress herself shared a picture of their meet and called Aamir a "true superstar."

Aamir Khan paid a surprise visit to Rishi Kapoor who is currently in New York, undergoing treatment for an illness.

Sharing a picture of their meeting, actress and wife of Rishi, Neetu Kapoor called Aamir a “true superstar”. She captioned the post: "It's not how many hours one spends with a person, it's how much you give in that time. Aamir gave so much and more - Love, respect, warmth and laughter. He is a true superstar."

For those who have not been following the news of Rishi Kapoor’s illness, the couple moved to the US in September last year, so that Rishi can easily get treated for an undisclosed illness. While they have hinted and we presume that it’s cancer that he is dealing with, they have not announced it anywhere.

It’s not how many hours one spends with a person it’s how much u give in that time !!! Aamir gave so much n more Love Respect Warmth Laughter !! He is a true superstar ❤️💕🤗

Rishi and Aamir have co-starred in ‘Fanaa’ that came out in 2006. Their first film together was, however, 1993’s ‘Damini’ in which Aamir had a cameo.

This is not the first time a Bollywood celeb has gone to visit the star. Anupam Kher, Priyanka Chopra, Sonali Bendre have gone to meet Rishi in these months.

Also, son Ranbir Kapoor, girlfriend Alia Bhatt was spotted during Thanksgiving week in the US with Ranbir’s sister Riddhima and family.