A fan asks Blackpink's Jennie out on a date through $30,000 billboard ad, netizens calls him 'creep' 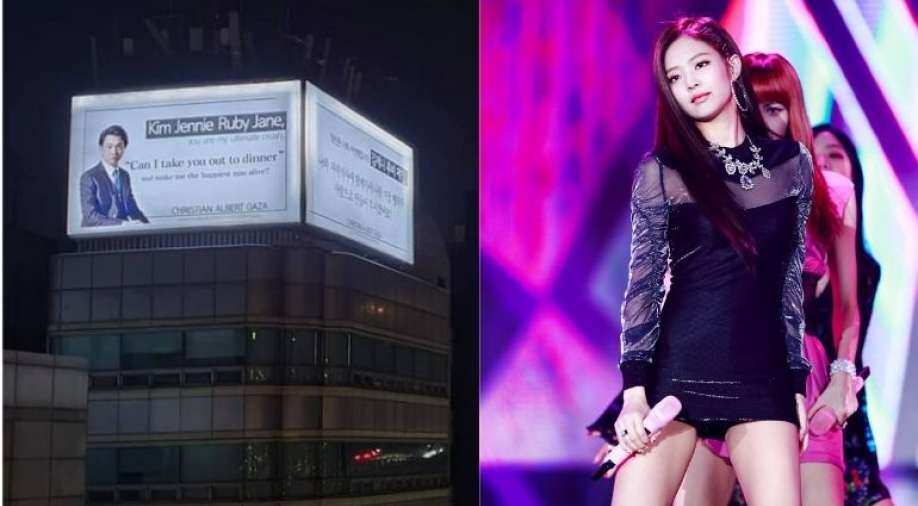 A fan asks Blackpink's Jennie out on a date through a billboard ad Photograph:( Twitter )

Jennie Kim is a South Korean K-pop star who is the vocalist of the famous girl band, Black Pink.

A Filipino businessman, who confessed his feelings to Blackpink's Jennie in front of the whole world and asked her out on a date through a billboard has become the talk of the world.

The Billboard ad was placed by a businessman and social media influencer named Christian Albert Gaza. The ad features suited up Albert and reads, "Kim Jennie Ruby Jane, Can I take you out to dinner and make me the happiest man alive?" in English.

As per reports, Gaza took this step, as he didn't have any other method to contact Jennie, so he posted the billboard ad in the heart of Korea.

Reportedly, he paid US$30,000 for the add and it was placed on the roof of a building in Seobinggo-dong, Yongsan-gu, Seoul. The ad was placed a few kilometres away from YG Entertainment, BlackPink's management agency.

In his Facebook post, Gaza also mentioned that he was planning to gift Jennie a flat but he found out that she is no longer accepting gifts from fans.

Ever since the Billboard posting, Blackpink fans have been calling out and condemned him as a “creep” and asked for the agency to take action to protect the K-pop star.

This is not the first time when he has done something like this. In 2017, he had invited Filipino actress Erich Gonzales for a coffee date using a billboard in Manila. "I can't even espresso how much I like you a latte. Will you drink coffee with me?", he wrote, unfortunately, she turned him down.