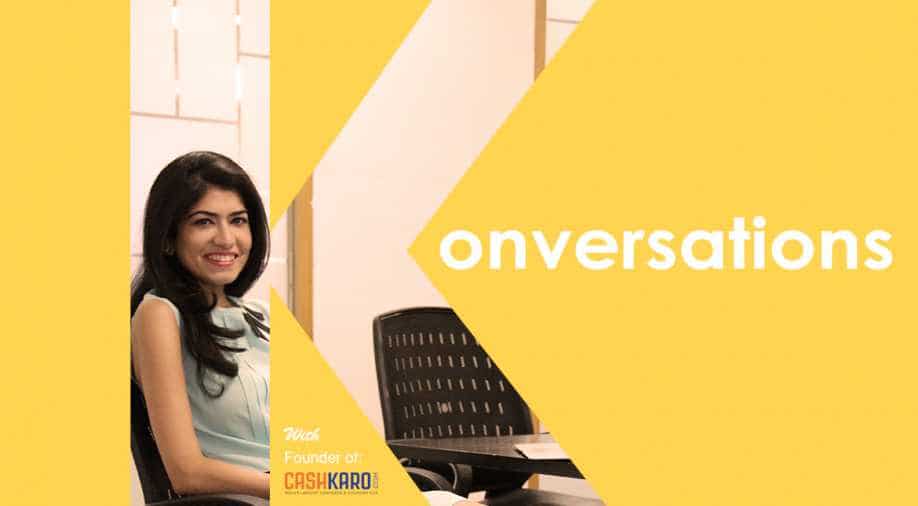 'Work hard and have faith in what you have set out to achieve' (Graphic by: Manish Kumar) Photograph:( WION )

She is a London School of Economics graduate and went on to work with Goldman Sachs. But five years later, the entrepreneurial bug bit Swati Bhargava, and she left her corporate career to create something of her own.

Together with her husband Rohan, she founded Pouring Pounds, one of UK’s leading cashback and voucher websites, bringing in 3,000 popular brands like Tesco, Expedia and Argos. In 2013, she returned to India to implement the same concept for a whole new market. The new venture was aptly named: CashKaro. The platform has become India's largest reward site receiving funding from Kalaari Capital & investor Ratan Tata.

Kazimi: Of all the ideas out there, why this idea for a startup?

Swati: We picked up this idea because Rohan and I are users of cashback sites ourselves and personally believed in the concept.

Kazimi: It is a crowded space. So any inspiration from an existing player?

Swati: While coupon and deals model was doing well in 2013, we were sure the cashback model, which was a proven, tried & tested model in the West, can bring value and sweeten the deal for the conscious Indian online shopper. We were inspired by the success of Ebates.com, largest US cashback site and Fanli.com, the former being acquired by Rakuten for $1 Billion and the latter becoming China's largest cashback site with $1 Billion valuation.

Kazimi: Any startup effort is riddled with challenges. What were yours?

Swati: When Rohan & I started out, only coupon sites existed in India. We had to ensure that our concept was understood by partnering e-retailers and customers both. A lot had to be put in process to ensure retailers paid commission on time and played fair, so that users get paid on time.

Secondly, hiring has been and remains a huge challenge. For any business, especially for a start-up to succeed, it is important to build a team that shares the same passion. Similar to other start-up ventures, talent availability and retention are major hurdles.

Kazimi: How has the market responded to your venture?

Swati: We enjoy a savvy 1.5 million user base and have credited close to $5 million as cashback to our users till date and expect to credit over $6 million in the next few months.

Kazimi: What keeps you going -- when faced with challenges?

Swati: Perseverance is the essence. My mom taught me to always keep going no matter what from an early age. When it feels too difficult to push forward, I always remind myself, 'This too shall pass,' and then I redouble my efforts.

"Perseverance is the Essence"

Kazimi: What would you say is the one common quality between all your team members?

Swati: One common quality between all our employees would be the energy and zeal that they work with. It’s very important to have people on board who share the same passion and enthusiasm and I think we are quite lucky on that part.

Kazimi: Do realize that you are inspiring other women by breaking gender stereotypes?

Swati: Dealing with stereotypes that question a woman’s ability to work in tech or finance, or simply her stability at work continues to be one of the major challenges in a male dominated industry. By breaking gender stereotypes, it gives women an amazing opportunity to strive to be better, fight harder, be stronger and bring to life the incredible feats a woman is capable of!

However, I believe that at the end of the day, your work should speak for itself, and at that point, it doesn’t matter whether you are a man or a woman!

Kazimi: Do you think you have evolved as a person in this journey?

Swati: The entire experience has been exhilarating and has imbibed in me positivity, patience and to learn from my failures.

Kazimi: What do you look forward to, for your venture and the company?

Swati: Going forward, we aim to make our company the No.1 online destination for all kinds of discounts, offers, vouchers, etc., and expand to South East Asia in the next two years.

Kazimi: What is the mantra you want to share with other budding entrepreneurs?

Swati: Work hard and have faith in what you have set out to achieve. You’ll only be able to do justice if you really believe in the idea and your ability to execute it! If you feel that the going is getting too tough… just stay at it. It’s not been easy for anyone who was there before you too. Sometimes people are successful just because they lasted.

"Sometimes people are successful just because they lasted"