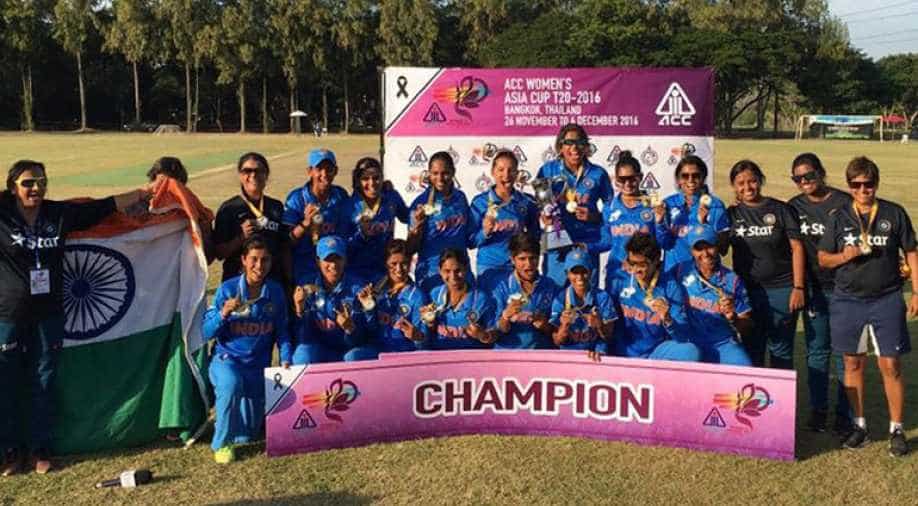 The bowlers bowled brilliantly to limit Pakistan to 104 for six. Photograph:( Facebook )

Indian women maintained their supremacy in the Asia Cup by beating arch-rivals Pakistan for their sixth title in as many editions here today.

Mithali Raj, who was removed as T20 captain before the start of the tournament, made a statement with an unbeaten 73 to guide India to 121 for five in 20 overs.

The bowlers then bowled brilliantly to limit Pakistan to 104 for six, completing a comprehensive 17-run win. The star with ball once against was left-arm spinner Ekta Bisht, who took two wickets conceding 22 runs in her four overs.

It was the second time that India got the better of Pakistan in the competition, having beaten them by five wickets in the league stage besides remaining unbeaten in five games en route to the final.

It was also a sweet revenge of sorts for India, who had lost to Pakistan during the World T20 at home in March.

Recently, the ICC had docked them six points for not playing Pakistan.

With the memorable win, India also managed to maintain their enviable record in the continental event, having won all the six editions to have taken place so far.

However, the first four editions starting from 2004 were played in the 50 over format and the following two have been in the shortest format. In the last edition held in Guangzhou in 2012, India lifted the trophy after defeating Pakistan in the final.

The champion team could not have repeated the feat if it was not for the superlative efforts from Raj and Bisht.

Raj was instrumental in the team's resounding success, amassing 220 runs in four innings to end as the tournament's highest run scorer in the competition by some distance. Second in the list was Pakistan's Javeria Khan with 128 runs in six innings.

Raj kept calm in both tense games against Pakistan to help the team's cause. Her 73 not out in the final was her highest score in the tournament and it came in quick time at the top of the order. She ended with a strike rate of 112, smashing seven fours and a six.

It was also an occasion where the veteran made amends for her slow batting during World T20 where India lost to arch-rivals.

With her showing, the 34-year-old displayed she still has a lot to offer in the T20 format after being sacked as captain to make way for Harmanpreet Kaur.

The new captain had a quiet tournament by her standards as the all-rounder failed to muster up a 30 plus score in six innings and took just two wickets.

Left-arm spinner Bisht came good for India with the ball, ending as the team's most successful bowler with 10 wickets at an average of 5.20.

She, along with the rest of the bowlers, ensured Pakistan never got close to the target.