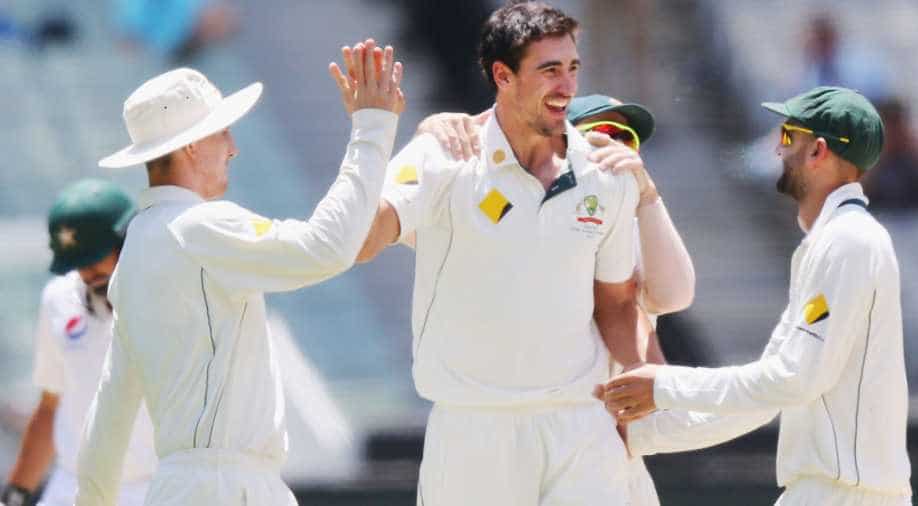 Starc then gave the same treatment to Wahab Riaz, bowling the paceman for a duck with another fiery delivery that beat the outside edge. Photograph:( Getty )

Mitchell Starc shone with bat and ball as Australia dismissed Pakistan for 163 to secure an innings and 18 run victory in the second test on Friday, the win giving the hosts an unassailable 2-0 lead in the three-match series.

Home captain Steve Smith smashed an unbeaten 165 and gave his bowlers 68 overs on the fifth and final day to run through their opponents after declaring their first innings at 624 for eight before lunch, a lead of 181 runs.

In the end, they only needed 53.2 overs of the quota as pace spearhead Starc tore through the tail after tea, finishing with 4-36, with Pakistan crumbling on a benign Melbourne Cricket Ground pitch bathed in brilliant sunshine.

Pakistan lost the first test in Brisbane by 39 runs but won admiration for their dogged fourth innings resistance.

However, much of that acclaim evaporated on Friday as their shambolic batting display followed an abysmal effort in the field in the morning.

Pakistan's 52-year wait for a maiden series win in Australia goes on and they have now lost four matches in succession heading to the series finale in Sydney on Jan. 3.

"It's fantastic for us to get that result. We always thought that if we could find a way to get ourselves ahead of the game we'd find a way to win," said Starc, who smashed seven sixes in an MCG record during a swashbuckling knock of 84 in the morning.

"Everyone (was) going out there and believing that if we took those chances we would create enough to get 10 chances today.

"It was a fantastic way to finish the Boxing Day test."

Pakistan resumed on an already precarious 91-5 after tea, with opener Azhar Ali and wicketkeeper Sarfraz Ahmed tasked with surviving 36 overs to usher their team to safety.

But their partnership lasted less than three overs after the break when Josh Hazlewood trapped Azhar, Pakistan's last specialist batsman, lbw for 43.

At 143-6, Jackson Bird thudded a delivery into Amir's pads when the tail-ender was on 11 but Smith wasted a review after the lbw appeal was turned down.

It changed little, however, as Bird bowled him two balls later.

Sarfraz Ahmed had battled doggedly as his partners disappeared around him but he was bowled for 43 through the gate with a sizzling Starc inswinger.

Starc then gave the same treatment to Wahab Riaz, bowling the paceman for a duck with another fiery delivery that beat the outside edge.

He wrapped up the win by having Yasir Shah sky an easy catch to Bird at mid-on.

Off-spinner Nathan Lyon, who was under pressure to retain his spot in Sydney after a run of mediocre performances, set Australia on course for the win when he captured three wickets in the middle session, including two in three balls.

The tourists were already one wicket down at lunch, with Hazlewood having bowled opener Sami Aslam for two and Babar Azam soon departed for three off the first ball after the interval, trapped lbw by Starc.

Azhar and Younus Khan dug in for an hour but Lyon removed the latter two overs after the drinks break for 24, when the veteran coughed up a catch to Peter Handscomb at short leg.

Lyon grabbed his third victim late in the session when Asad Shafiq deflected a catch off his body for Handscomb to take a fine catch at short leg.

Smith and Starc hammered Pakistan's bowlers in a 154-run partnership after Australia had resumed on 465-6 in the morning.