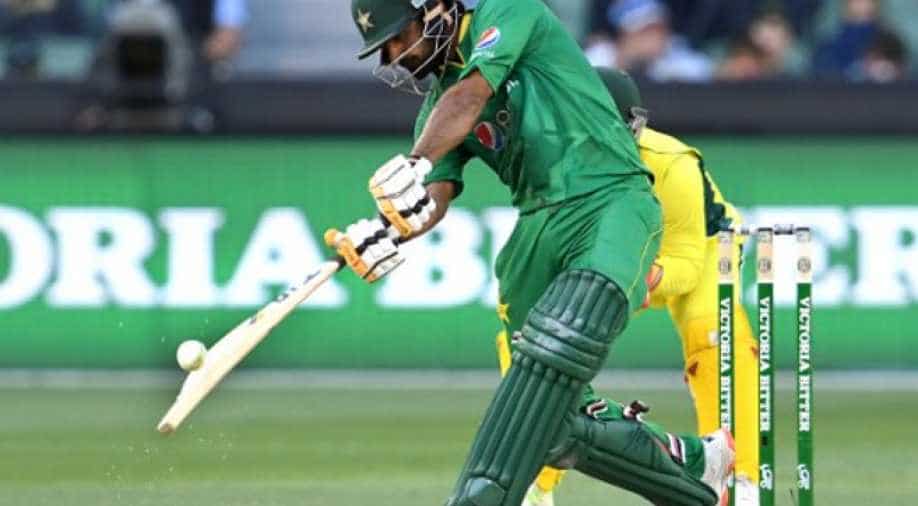 Captain Mohammad Hafeez's 72 ensured Pakistan did not suffer any initial hiccups in their modest chase of 221. Photograph:( AFP )

Pakistan beat Australia by six wickets in the second one-day international at the Melbourne Cricket Ground on Sunday, their first ODI win on Australian soil for 12 years.

The win was also Pakistan's first ODI victory at the MCG since 1985 and levels the five-match series at 1-1.

Australian captain Steve Smith won the toss and chose to bat first on a flat-looking wicket, but Pakistan's opening pair Mohammad Amir (3-47) and Junaid Khan (2-40) bowled superbly to help restrict the home side to 220 all out.

They were backed up by left arm spinner Imad Wasim (2-37), whose 10-over spell in the middle of the innings tied the batsmen down and slowed the scoring.

The modest total never looked enough once Pakistan captain Mohammad Hafeez (72) and fellow opener Sharjeel Khan (29) had put on 68 for the first wicket.

Babar Azam chipped in with 34 before Shoaib Malik (42 not out) and Umar Akmal (18 not out) guided the visitors home with 2.2 overs to spare.

"I think the bowlers did a great job for us," said Hafeez, who was also named man of the match.

"We wanted to get a total on the board that we were comfortable with because the ball wasn't coming onto the bat.

"The bowlers took wickets at the right time and kept the pressure on."

Australia went into the match without a recognised spinner and were made to pay the price on a two-paced wicket that favoured the slower bowlers.

Their seam attack did its best to restrict the Pakistan batting, with Josh Hazelwood (0-32) the most impressive despite not taking a wicket, and James Faulkner (2-35) effective with his changes of pace.

But the other bowlers were ineffective and expensive, with off-spinner Travis Head going for 23 runs off his 2.4 overs.

Amir and Junaid Khan set the tone early with their impressive opening spells.

Junaid, brought into the team in place of Wahab Riaz, induced an edge from the dangerous David Warner (16) to leave the Australians on 31-1.

Junaid soon added the scalp of Usman Khawaja when he edged to first slip Sharjeel Khan, who took a fine catch low to his left.

Australia promoted all-rounder Mitchell Marsh up the order but the experiment failed as he scooped the first ball he faced from Amir to Imad at cover to leave the home side 41 for three.

Head then joined Smith in the middle and hit five boundaries on his way to 29 before he edged Hasan Ali to Mohammad Rizwan with Australia on 86 for four.

Smith (60) brought up a hard-fought 50 from 91 balls with only two boundaries and no sixes, but with eight overs to go he got an inside edge onto his pads and then stumps to give Imad his second wicket.

There was a steady procession of wickets until Faulkner skied a ball to point off Amir to leave Pakistan needing only 221 to level the series.

Smith said the Australians had paid the price for attacking too early and losing key wickets before the spinners came on to bowl.

"We were probably about 40 runs too short -- the bowlers did a pretty good job of trying to contain them, but we just weren't good enough," he said.