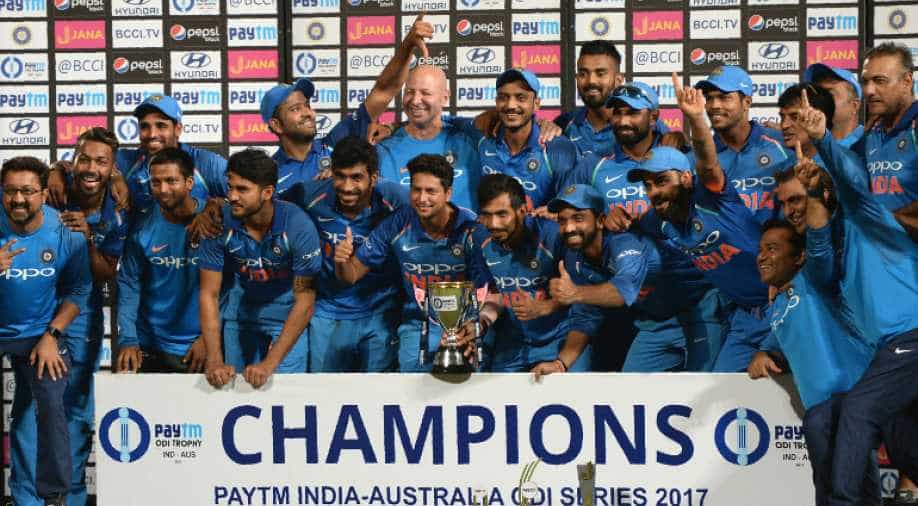 The Indian cricket team pose with the trophy after winning the fifth one-day international cricket match against Australia at the Vidarbha Cricket Association Stadium in Nagpur. Photograph:( AFP )

Virat Kohli asked?India?to be 'relentless' after?they thrashed Australia by seven wickets in the fifth one-day international ||Rohit Sharma was man of the match ||Hardik Pandya won the man of the series title

Skipper Virat Kohli Sunday urged India to be "relentless" after they thrashed Australia by seven wickets in the fifth one-day international, clinching the series 4-1.

Chasing 243 for victory, the hosts rode on opener Rohit Sharma's 109-ball 125 to achieve their target in 42.5 overs at Nagpur and get back to the top of ODI world rankings table.

India, who reached the ODI summit after three straight wins in the series, had slipped behind South Africa following their loss in the fourth game. They were already the top Test team.

"It feels good. It was a really convincing series win for us. Ticked all boxes... We had a chance to retain the No. 1 spot and we ended up doing that," Kohli said at the presentation.

"The management also plays a massive part in motivating players after being 3-0 up in the series. But we want to be relentless," he added.

It was a disciplined bowling effort led by spinner Axar Patel, who claimed three wickets, that set up India's comfortable victory after restricting the visitors to 242-9.

In reply, Sharma and Ajinkya Rahane, who made 61, put on a 124-run opening stand to lay a solid foundation in another dominating performance in recent times.

"We repeated the way we played against Sri Lanka (beat them 9-0 across the three formats), proud of that. Shows the quality of the side, regardless of the opposition," said Kohli.

Man of the match Sharma, who opened his account with two successive boundaries after 14 deliveries, was the first to get to his fifty with a double off Marcus Stoinis.

Rahane also got his fourth successive 50-plus score before being trapped lbw by paceman Nathan Coulter-Nile, who ended with 10 wickets in the five matches.

Sharma went on to register his 14th ODI ton during his 99-run partnership with Kohli, who made a sedate 39. He got to his hundred with a six off Coulter-Nile.

Leg-spinner Adam Zampa sent Sharma, who hit 11 fours and 5 sixes, and Kohli back to pavilion.

Kedar Jadhav, unbeaten on five, and Manish Pandey, 11 not out, then saw the team through.

Earlier, opener David Warner's 62-ball 53 was not enough to inspire Australian batting as they ended on a below-par total after electing to bat first.

All-rounder, Hardik Pandya, who struck first by getting Aaron Finch out for 32, was given the man of the series award for his six wickets and 222 runs in the series.

Travis Head and Stoinis tried hard to counter a persistent Indian bowling with their 87-run fifth-wicket partnership, but their departure spelt further trouble for the visitors.

Head, who made 42, and Stoinis, who scored 46, failed to convert their starts into bigger scores as Australia totally lost steam in the final five overs.

"Lost wickets in clumps again. Have a few things to look at to try and improve and gain the consistent performances we're after," said a disappointed Smith.

"We've been outplayed and deserve to lose 4-1...India have got a very good balance. We have six or so days until the 3-match T20I series. We'd like to go home with a trophy," he added.

The action now shifts to the three Twenty20 internationals starting Saturday in Ranchi.