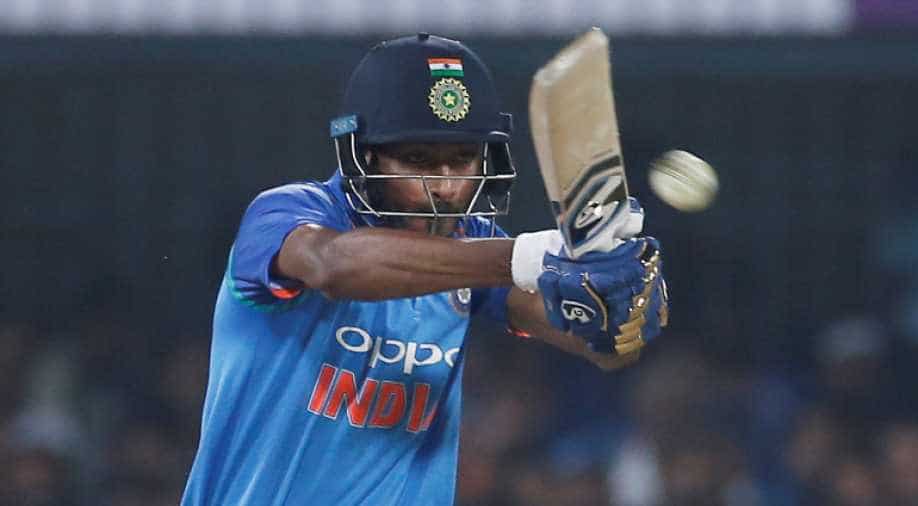 India's Hardik Pandya plays a shot during the third ODI in Indore on September 24. Photograph:( Reuters )

All-rounder Hardik Pandya celebrated his promotion in the batting order with a breezy 78 to help secure India's series-clinching five-wicket victory in the third one-day international against Australia on Sunday (September 24).

Three of India's top four batsmen scored 70 or more as the hosts chased down a 294-run victory target at Holkar Stadium in central Indore city, with 13 balls to spare for their third successive victory in the five-match series.

Pandya, who was promoted to number four, said message was simple - "play your game".

The man-of-the-match hit four sixes and five fours and took India closer to victory before getting dismissed by Pat Cummins in the 46th over.

Earlier, Aaron Finch smashed 124 on his return but Australia, cruising at 224-1 at one stage, suffered a mini-collapse to settle for 293-6 in the Holkar Stadium.

Australian Captain Steve Smith credited the Indian pace bowlers for bowling well towards the end of their innings and restricting them to under 300 and blamed poor shot selections of batsmen for failing to take advantage of the platform set by Finch.

Australia captain Steve Smith won the toss for the first time in the series and opted to bat first.

Openers Finch and David Warner give Australia a solid, if not spectacular, start with a 70-run stand as the tourists looked determined to preserve wickets.

Pandya bowled Warner for 42 but Finch and Smith added 154 runs for the second wicket with a 325-plus total looking well within Australia's reach.

Left-arm wrist-spinner Kuldeep Yadav dismissed both to trigger a collapse as Australia lost five wickets for 51 runs to fall short of the 300-mark.

India reached the 100 mark in 15 overs without losing a wicket with Rohit Sharma leading their robust reply with a blistering 71.

India soon suffered a mini-collapse of their own, losing four wickets, including their openers and skipper Virat Kohli, for 67 runs.

However, Pandya and Manish Pandey with 36 in 32 balls ensured that India achieves unassailable 3-0 lead in the series.

India's ninth consecutive ODI win also ensured they are now the top ranked team both in tests and the one-day format.