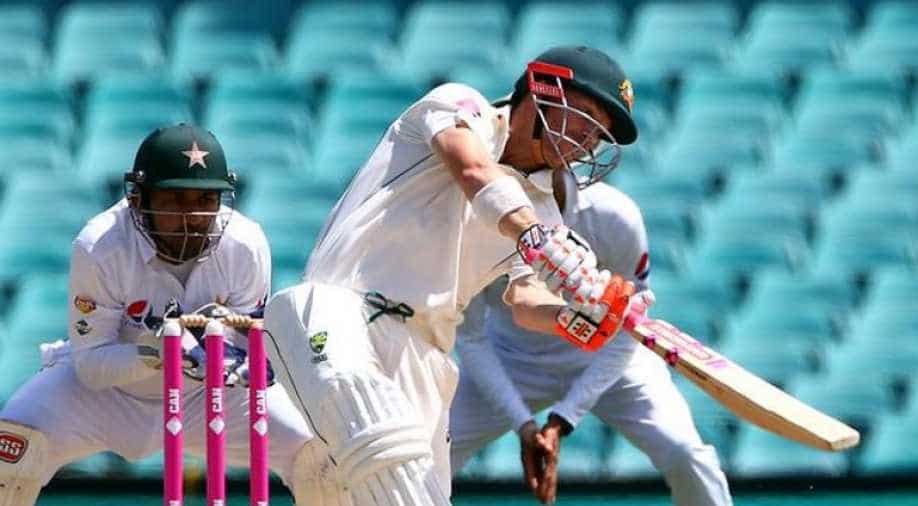 Warner clubbed the second fastest half-century in Test history to help fire Australia to the verge of a 3-0 series sweep Photograph:( Reuters )

David Warner clubbed the second fastest half-century in Test history to help fire Australia to the verge of a 3-0 series sweep over Pakistan at the Sydney Cricket Ground.

The tourists were 55 for one at close of play on the rain-disrupted fourth day of the third Test, still 410 runs short of their unlikely victory target of 465.

Warner needed just 23 balls to score his half-century - two more than the record set by Pakistan skipper Misbah-ul-Haq against Australia in Abu Dhabi in 2014 - to help the hosts knock off 241-2 before declaring after tea.

Steve Smith (59), Usman Khawaja (79 not out) and Peter Handscomb (40 not out) also poured on the runs after Warner was dismissed for a swashbuckling 55 off 27 deliveries.

"The way the guys batted today, especially Warner of course, to get those runs as quickly as possible and do some pretty unselfish batting, and got us in the position we are in now," said paceman Josh Hazlewood, who took 4-55.

"The wicket's still pretty good, but I think there's enough there to create nine more chances, if it's reverse swing or spin."

Earlier, after the opening session was washed out for the second day in a row, Younus Khan completed an imperious 175 not out before running out of partners as Pakistan were dismissed for 315, still 223 behind Australia's first innings 538-8.

Khawaja opened in his place but spent his first 40 minutes mostly a spectator as Warner, who on Tuesday become the first batsman to score a century in the opening session of a Test in Australia, again attacked the Pakistan bowlers. Warner slapped a four over midwicket from the first ball he faced and had added 10 more boundaries by the time Wahab Riaz removed him some 42 minutes later. In one stunning over, the left-hander smashed spinner Yasir for two sixes and two fours from the first four deliveries before adding a single off the fifth for good measure.

"We want to finish this Test series on a good note, so I think it will be better for us if we show some fight," Younus said.

"It will not be easy because it is the fifth day in Sydney and they have two spinners and good fast bowlers as well. It is our wish that we finish this Test match on a good note," the Pakistani batting legend added.