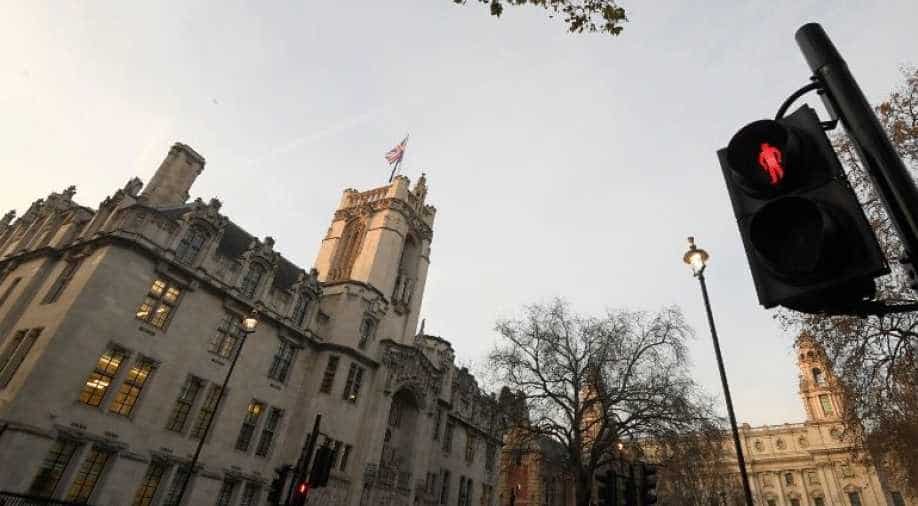 FILE PHOTO: A pedestrian traffic signal shines red outside the Supreme Court on the first day of the challenge against a court ruling that Theresa May's government requires parliamentary approval to start the process of leaving the European Union, in Parliament Square, central London, Britain Photograph:( Reuters )

Alex Gerbi, a partner at the firm representing Kiev in the case, said Ukraine would argue that the debt was incurred under duress

Ukraine will ask the British Supreme Court on Monday not to force it to pay billions of dollars in debt to Russia without a trial that would determine whether Kiev was forced to borrow the money under duress.

The case, being decided in London because the debt was structured as a Eurobond under English law, could see British courts rule on some of the most contentious issues in the Russia-Ukraine feud that has divided Moscow from the West.

The debt was borrowed six years ago by a pro-Russian president months before he was toppled in a popular uprising. Moscow is seeking a summary judgment in its favor that could see Ukraine ordered to pay the debt in full, without a trial.

Ukraine argues that it should not be forced to pay without having a chance to challenge the debt, a position backed by an appeals court in a ruling that Russia now wants the Supreme Court to overturn.

Alex Gerbi, a partner at the firm representing Kiev in the case, said Ukraine would argue that the debt was incurred under duress.

"Russia should have to prove its claim, and justify its conduct, in the full public scrutiny of an English trial,” Gerbi said.

Ukraine has accused Russia of applying “massive, unlawful and illegitimate economic and political pressure to Ukraine in 2013”, forcing the country to accept Moscow’s financial support instead of striking up closer ties with the EU, according to earlier court documents.

Moscow has not commented on the case. A source familiar with the Russian position said Russia would argue that Ukraine's case has no merit and no trial is needed.

The $3 billion bond was borrowed by Ukraine in the final months of the administration of President Viktor Yanukovich, a supporter of close relations with Moscow who was toppled in a public uprising after abandoning a deal on ties with the EU.

Russia responded to Yanukovich's fall by seizing Ukraine's Crimea peninsula and backing separatists in eastern Ukraine in a war which has killed more than 13,000 people. The United States and European Union responded to those Russian moves with sanctions against Moscow which have yet to be lifted.

Ukraine's new president, Volodymyr Zelenskiy, is scheduled to meet Russia's Vladimir Putin on Monday to push for a peaceful resolution to the conflict in eastern Ukraine.

Both countries are also due to renew a gas transit deal a regular source of disagreement between them -- by the end of December.

The Eurobond matured in December 2015 and has not been repaid. Moscow wants payment in full, including interest which could push the debt beyond $4 billion. Kiev says Russia should have participated in a 2015 restructuring of its Eurobonds.

The case is one of two major court cases this month being watched by international investors in Ukraine. Hearings are due to begin in Kiev on December 19 in the case of the nationalisation of Ukraine's largest commercial bank.