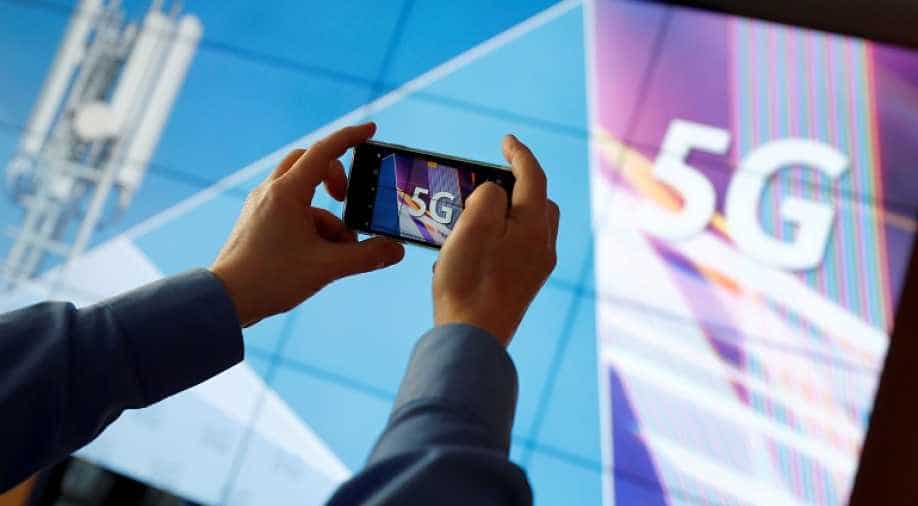 A journalist uses his mobile phone to take a picture of the 5G logo prior to the auction of spectrum for 5G services at the Bundesnetzagentur head quarters in Mainz, Germany, March 19, 2019. Photograph:( Reuters )

The world's largest contract chipmaker reported a decline in second-quarter profit but said demand is likely to recover during the rest of 2019 particularly from smartphone makers, hampered at present by the impact of a Sino-US trade war.

Taiwan Semiconductor Manufacturing Co Ltd (TSMC) on Thursday said it expects a stronger half-year on 5G telecoms demand, and that a dispute over chip-making materials between Japan and South Korea in its most uncertain factor.

The world's largest contract chipmaker reported a decline in second-quarter profit but said demand is likely to recover during the rest of 2019 particularly from smartphone makers, hampered at present by the impact of a Sino-US trade war.

"Although our business continues to be impacted by a global slowing economy ... we have also passed the bottom of the cycle of our business and again began to see demand increasing," Chief Executive Officer and Vice Chairman Chung Ching Wei told analysts during an earnings briefing.

Taiwan's supply chain manufacturers have been navigating slowing global demand for smartphones - a primary source of revenue - as well as market disruption stemming from tit-for-tat import tariffs between China and the United States, plus the latter's ban on US companies doing business with Chinese telecoms equipment maker Huawei Technologies Co Ltd.

TSMC Chairman Mark Liu said the dispute is a major uncertainty for the coming months as it is likely to impact technology supply chains, as Japan dominates the market for the materials in question.

Revenue rose 3.3% to T$241 billion but fell 1.4% to $7.75 billion in US dollar terms - still topping both the firm's forecast and the average of 23 analyst estimates compiled by Refinitiv.

Business in the third quarter will be driven by increased demand for fifth-generation telecommunications (5G) equipment as well as for smartphones spurred by new product launches, and the fourth quarter will be even stronger, Wei said.

The chipmaker also said it expected annual capital expenditure for the year to exceed the high end of its earlier forecast of $10 billion to $11 billion due to strong 5G demand.

Even so, analysts were cautious about TSMC's growth outlook for the coming months, citing a slower-than-expected introduction of 5G technology and still-tepid demand for smartphones, which they said accounted for nearly half of its first-quarter sales.

"With a still-slow demand recovery and excessive inventory, we think wafer orders from fabless companies might remain weak," Fubon Securities analyst Sherman Shang wrote in a research note prior to TSMC's earnings announcement.

TSMC's short-term downside, however, could be supported by "major customers' recovery in 2020 from a very low base in 2019, such as Apple," Shang wrote.

Prior to TSMC's announcement, shares in the chipmaker closed up 0.8% versus a 0.25% fall in the wider market. The stock has risen around 13% so far this year.