Indian stock market indices ended higher Friday with the Nifty posting a record closing high led by gains in financials and metal stocks. The midcap index ended lower. Selling was seen in pharma and IT indices.

Among sectors, the Nifty Energy index rose around 1.5 per cent while auto, financial services, metal and FMCG sectors were also in the green.

Reliance Industries was the biggest contributor towards the indices' rally today after the stock clocked its sharpest intra-day rally in two months and zoomed 6.4 per cent.

European shares rose to a record high on Friday as UK-exposed financial stocks gained following a hawkish comment from a Bank of England official, with the prospects of increased US fiscal spending boosting market sentiment. That apart, European economic sentiment and consumer confidence data, which is due later in the day, is also expected to show an improvement in May. 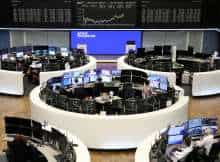