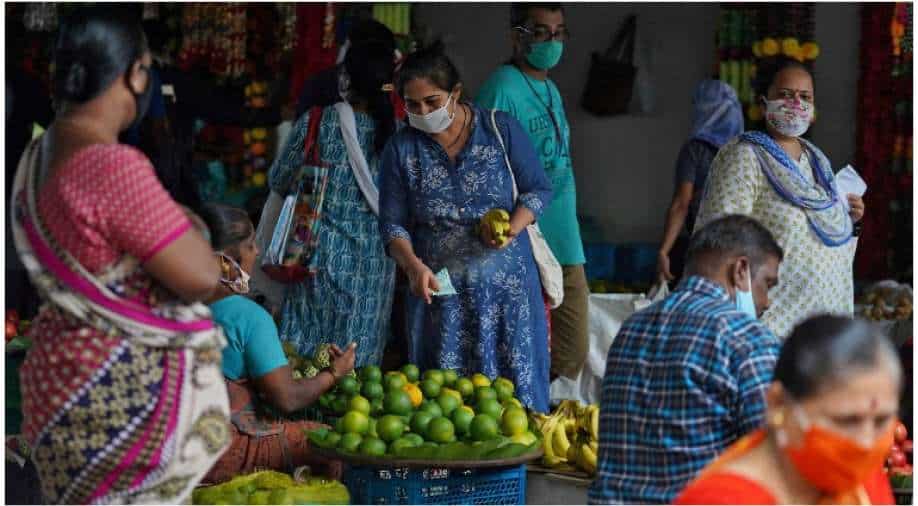 FILE PHOTO: A woman wearing a protective face mask buys fruit in a market, amidst the spread of the coronavirus disease (COVID-19) in Mumbai, India, August 20, 2020 Photograph:( Reuters )

India also revised its annual GDP estimates for the fiscal year, predicting a 7.3% contraction, less than its earlier estimate of -8.0%

India's economic growth picked up in the January-March quarter from the previous three months, but economists have grown pessimistic about this quarter after a huge second wave of COVID-19 infections hit the country last month.

That compared with revised growth of 0.5% in the previous three months and 1.0% according to a Reuters poll of economists.

India also revised its annual GDP estimates for the fiscal year, predicting a 7.3% contraction, less than its earlier estimate of -8.0%.

A slow vaccination drive and local restrictions after a massive second wave of infections and deaths across the country have hit economic activities like retail, transport and construction while putting millions out of work.

India has recorded 28 million COVID-19 infections, behind only the United States, and 329,100 deaths as of Monday, although the rise has begun to slow.

Economists said the economy, which was facing a slowdown even before the pandemic, may now see a collapse in consumer demand, which accounts for more than 55% of the economy, as household incomes and jobs have declined.

Garima Kapoor, economist at Institutional Equities, Elara Capital Mumbai, said the March GDP numbers reflected the impact of the unlocking of the economy before the second wave hit.

"The rebound in consumer spending would hence be more gradual than the first wave, with vaccination being the key driver."

The central bank, which has kept monetary policy loose while boosting liquidity to the economy, said last week the prospects will depend on how fast India can arrest infections.

Analysts warn that the slow rollout could pose medium-term risks to growth, especially if the country were to experience a third wave of COVID-19.

Unemployment soared to a near one-year high of 14.7% in the week ending May 23, according to the Centre for Monitoring Indian Economy, a Mumbai-based private think tank.