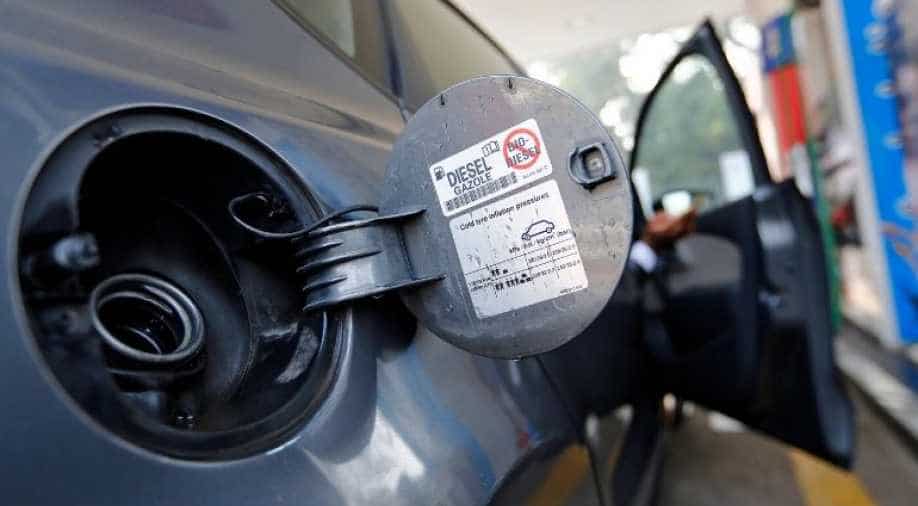 File photo: A vehicle waits to be filled up with diesel at a petrol station in New Delhi, India, January 5. Photograph:( Reuters )

India's demand for diesel will remain subdued until the second half of 2020, when analysts expect various policy measures aimed at stimulating industrial activity to kick in and soak up excess fuel.

Until consumption picks up in Asia's third-largest economy, where economic growth has slowed to six-year lows, refiners are likely to extend their recent stretch of rare diesel exports, which have weighed on refining margins in the region.

Diesel accounts for about two-fifths of refined fuel demand in India, which has grown by its slowest pace since the fiscal year 2014 this year amid tight credit markets, contracting auto sales and slowing rail and air traffic.

Diesel exports could climb by up to 8 million tonnes in the 2019-20 fiscal year from the 28 million tonnes shipped the year before, said an executive at a state refiner who could not be named due to company policy.

Ship-tracking data compiled by Refinitiv show India's diesel exports since the fiscal year start in April have jumped 8.9 per cent from the same period in 2018 to 17.7 million tonnes, the highest for that time span since at least 2015.

India consumed 83.5 million tonnes of diesel in the 2018/19 fiscal year, Ministry of Petroleum and Natural Gas data show, which was a record and 3 per cent above the prior year's total.

But demand growth in 2019/20 could be "flat or 1 per cent", according to K. Ravichandran, group head for corporate sector ratings at ICRA Ltd, a local of arm of Moody's.

"Diesel consumption will not improve before the first half of 2020," she said.

India announced cuts to corporate tax rates in September to help boost manufacturing and private investment, while the central bank also cut interest rates to spur economic activity, but the steps have yet to increase demand.

India has not released factory output data for October, but a 7.4 per cent decline in the month's diesel consumption the lowest in three years - suggests the country's industrial engine continues to sputter.

Diesel demand has also taken a hit from lingering monsoon rains which curbed consumption in the farm sector and hindered rural construction work since September.

Greater use of solar-powered irrigation pumps has dented farm sector demand, while a steady shift away from diesel to gasoline-powered cars has also slowed diesel consumption.

Oil demand may also be curbed by India's slowdown. Data last week showed annual economic growth slowed to 4.5 per cent in the July-September quarter, the weakest pace since 2013.

Even so, analysts expect the government's stimulus efforts to gain traction in the coming months and lead to a lift in diesel use in 2020.

Singapore based consulting firm FGE expects India's diesel demand growth to rise to about 2 per cent in 2020/21 from below 1 per cent in 2019/20, said Sri Paravaikkarasu, director for Asia Oil.

"We could expect the government to launch some stimulus measures to boost momentum in India's economic growth. This should support industrial and freight activities and infrastructure developments...providing the needed impetus to gas oil demand growth," she said.

The government is pushing for more reforms and incentives to attract foreign investors to set up factories in India.

An executive at a state refiner, who could not be named due to company policy, said diesel demand will continue to rise even if economic growth was slower and was more upbeat about 2020 demand.