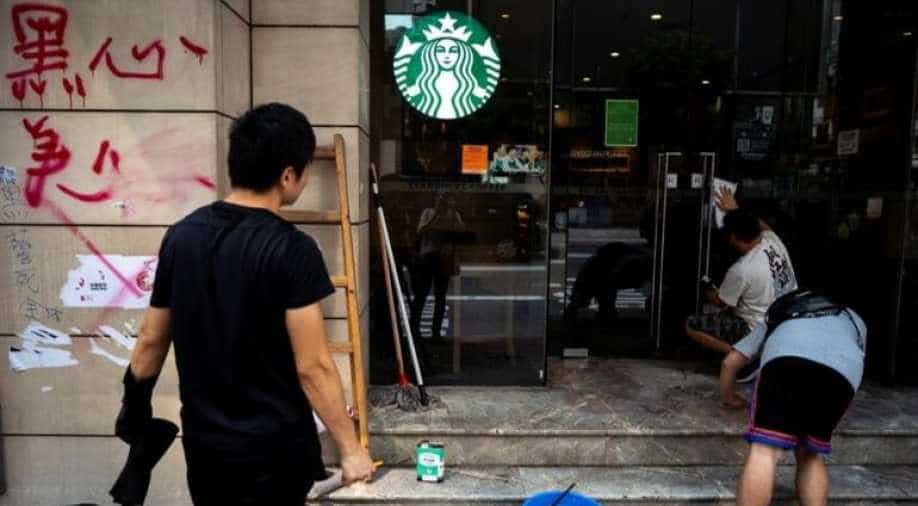 A worker cleans graffiti sprayed by anti-government protesters at a Starbucks coffee shop a day after a protest in Causeway Bay district, Hong Kong. Photograph:( Reuters )

New figures released Wednesday showed retail sales declined by a record 23 per cent year on year in August, compounding an 11.5% slump the month before.

The international finance hub is a major international tourist destination and especially popular with mainland Chinese shoppers hoping to snap up bargains in a city with no sales tax.

But this summer's protests, sparked by rising public anger towards Beijing's rule, has battered the economy which was already struggling with the US-China trade war fallout.

New figures released Wednesday showed retail sales declined by a record 23 per cent year on year in August, compounding an 11.5 per cent slump the month before.

Both police and protesters have only escalated their violence since then so there is little chance September's figures will fair any better.

Tuesday witnessed the worst clashes of the summer as China celebrated 70 years of Communist Party rule with a massive military parade in Beijing.

Usually, the first week of October is a bumper time for retailers.

But tourist arrivals from the mainland have tumbled as Beijing takes a hardline with protesters and police fight near-weekly battles against demonstrators.

On-year tourist arrivals fell 40 per cent in the last month, led by a collapse in visitors from the mainland, by far the largest group, with hotel occupancy rates down around half.

Luxury goods are thought to have been hit particularly hard.

Many of the clashes have taken place in the districts of Tsim Sha Tsui and Causeway Bay, both areas of the city that are packed with luxury malls and retailers.

Multiple shops in Causeway Bay told AFP last month their takings were down by as much as 30 per cent over the summer.