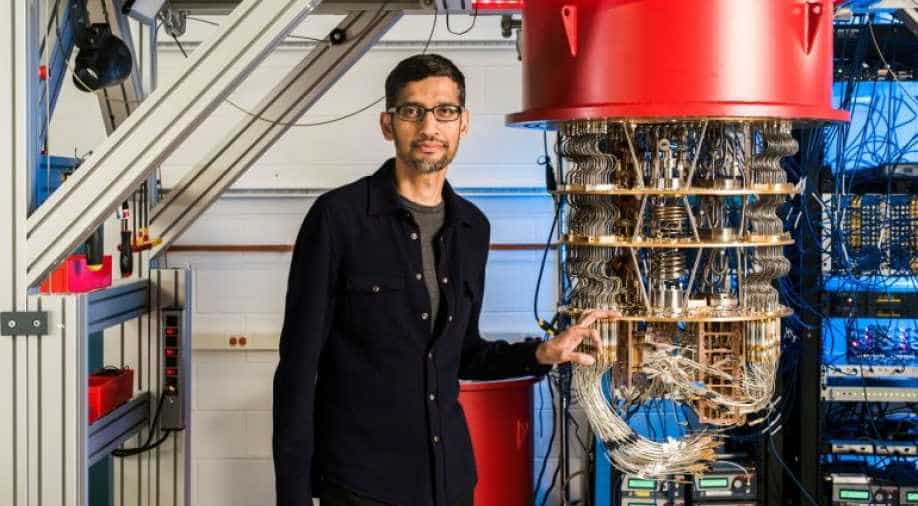 A handout picture from October 2019 shows Sundar Pichai with one of Google's Quantum Computers in the Santa Barbara lab, California, US Picture taken in October 2019. Photograph:( Reuters )

Google researchers expect that quantum computers within a few years will fuel advancements in fields such as artificial intelligence, materials science, and chemistry.

Alphabet Inc's Google said on Wednesday it had achieved a breakthrough in computing research by using a quantum computer to solve in minutes a complex problem that would take today's most powerful supercomputer thousands of years to crack.

Google researchers expect that quantum computers within a few years will fuel advancements in fields such as artificial intelligence, materials science, and chemistry. The company is racing rivals including IBM Corp and Microsoft Corp to be the first to commercialize the technology and sell it through its cloud computing business.

"We're hoping that when people start using this and looking at performance stability and cloud interface, they'll get really excited about what we have to offer at Google," John Martinis, the company's chief scientist for quantum hardware, told reporters.

The breakthrough was described in a paper published in the science journal Nature. It followed weeks of controversy since a draft leaked over whether Google's claim of "quantum supremacy" was valid.

IBM said a supercomputer employing a different set-up could solve the same challenge in under three days, while chipmaker Intel said, "quantum practicality" remained years away.

Google defended its position but did not dispute rivals' contentions. It has manufactured a handful of chips with 54 'qubits', vastly more powerful than the standard 64-bit chip in many consumer devices. However, for the technology to be useful to customers, it would need to make chips with thousands of qubits.

Martinis said Google sees "a pathway" to a computer with 1,000 qubits and expressed confidence that it had a reliable process to make its new chip, dubbed Sycamore.

The US and Chinese governments have led in the burgeoning quantum technology field, pledging billions of dollars in funding to corporate and state researchers to fast-track quantum development and mitigate possible issues, including the tech's expected ability to break digital encryption.

Google has been among the beneficiaries of American support. "The United States has taken a great leap forward in quantum computing," said US chief technology officer Michael Kratsios on Wednesday.

For decades, computer scientists have sought to harness quantum physics, laws governing the behaviour of particles that are smaller than atoms and can simultaneously exist in different states.

Quantum bits, or qubits, can be set to one and zero at the same time, unlike today's computer bits that are either ones or zeros. This superposition property multiplies exponentially as qubits become entangled with each other, meaning the more qubits connected, the vastly more powerful a quantum computer becomes.

But there is a catch: Quantum researchers need to cool qubits to about absolute zero (-273 degrees Celsius or -460 degrees Fahrenheit) to limit vibration - or "noise" - that causes errors in calculations. It is in this challenging task that Google, which has designed much of its own electronics and used liquid helium for cooling, has made significant progress.

CEO Sundar Pichai compared the achievement to building the first rocket to leave Earth's atmosphere and touch the edge of space, an advance that brought interplanetary travel into the realm of the possible.

"For those of us working in science and technology, it's the 'hello world' moment we've been waiting for - the most meaningful milestone to date in the quest to make quantum computing a reality," Pichai wrote in a blog https://blog.google/perspectives/sundar-pichai/what-our-quantum-computing-milestone-means.

Sycamore, measuring about 10 mm (0.39 inch) across, is made using aluminium and indium parts sandwiched between two silicon wafers. In their experiment this year, the researchers were able to get 53 of Sycamore's qubits to interact in a quantum state.

They then had the quantum computer detect patterns in a series of seemingly random numbers, and it succeeded in 3 minutes and 20 seconds. They estimated that the same problem would take 10,000 years for a Summit supercomputer - the most powerful in the world today - to solve.

Hold on a qubit

While the peer-reviewed research has drawn plaudits, with MIT's William D. Oliver comparing it to the Wright brothers' first flights, sceptics say Google is over-selling its achievement.

IBM said a supercomputer with additional disk storage can solve the random number problem in at most 2-1/2 days and with greater accuracy. It also said Google risked misleading the public by implying the new-style computers would replace existing ones.

"Quantum computers will never reign 'supreme' over classical computers, but will rather work in concert with them, since each has their unique strengths," Dario Gil, director of research at IBM, wrote in a blog.

Torsten Siebert, manager of the quantum computing research program at Germany's Fraunhofer Society, agreed that "progress was likely to be achieved through such hybrid combinations."

Researchers also have expressed concern about quantum computers being used, for example, to unseal secure data and passwords or enable new forms of surveillance.

But before quantum computers can break codes, security experts have plenty of time to adapt, Martinis said.

"We're pretty confident we'll all stay safe and secure in the future," he said.