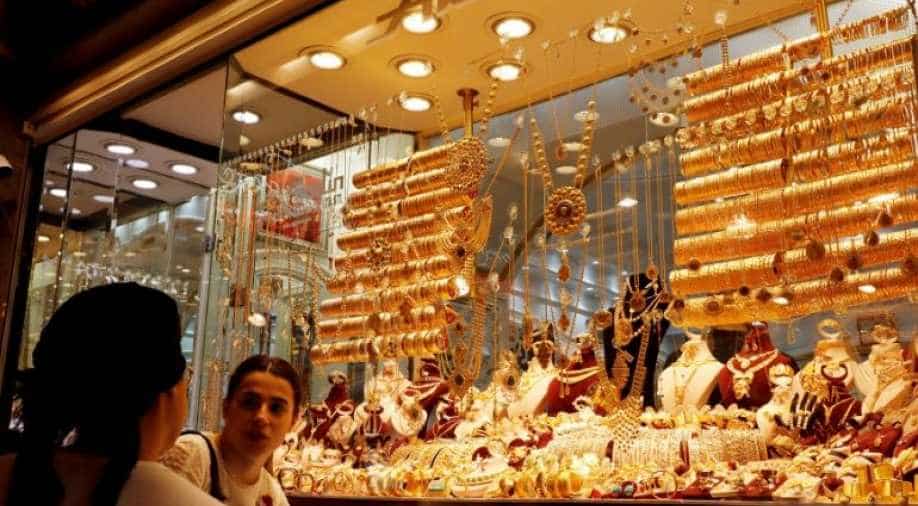 Women look at gold jewellery at a shop in Istanbul, Turkey. Photograph:( Reuters )

Gold prices rose on Monday, shaking off early losses to consolidate above the $1,400 pivot, as focus shifted to global growth concerns and interest rate cuts by major central banks.

Also helping gold, the dollar eased from multi-week highs and global stock markets were in red, helping the metal reverse course following a more than 1% fall on Friday after strong US jobs data lowered the likelihood of an aggressive rate cut by the US Federal Reserve.

"Despite the strong (US jobs) numbers, the market is expecting a rate cut, just not as aggressive it would have been. We are still in a rate easing cycle right now," said Howie Lee, an economist at OCBC Bank.

"Additionally, $1,400 is a pretty strong support level for gold. Also, growth remains weak globally and we have geopolitical tension between the US and Iran. Overall factors are still supportive of higher gold prices," he added.

US non-farm payrolls rebounded in June to 224,000, the most in five months, data showed on Friday, beating economists' consensus estimate of 160,000.

Fed Chairman Jerome Powell is expected to provide further cues on the near-term outlook for monetary policy this week at his semi-annual testimony to the US Congress on the economy.

However, persistent moderate wage gains and mounting evidence the economy was losing momentum could still encourage the Fed to cut interest rates this month.

A rate cut by the Fed could also prompt China's central bank to cut its benchmark policy rate for the first time in four years to support the slowing economy, analysts say.

Lower interest rates would support gold because they reduce the opportunity cost of holding non-yielding bullion.

Also on investors' radar is US-Iran tensions, with Tehran saying on Sunday it will shortly boost its uranium enrichment above a cap set by a landmark 2015 nuclear deal, prompting a warning 'to be careful' from US President Donald Trump.

On the technical front, spot gold may retest a resistance at $1,439 per ounce and as long as the metal stays above the support at $1,387, it may resume its uptrend towards $1,497, according to Reuters technical analyst Wang Tao.

Platinum rose 0.7% to $809.26, edging away from a more than one-week low touched in the previous session.